Roughly a century and a half ago, the field of biology was consumed by a debate over the nature of evolution.

On one side was Charles Darwin, with his theory of evolution by natural selection. According to Darwin, the genome of an organism mutates at random and any mutations that confer a selective advantage are more likely to be passed down through generations. This process of natural selection is passive: beneficial traits are acquired by chance and passed on in accordance with the selective advantage they provide. For example, at some point in the distant past, a lucky human experienced a random genetic mutation that resulted in their ability to process lactose after infancy and into adulthood.(a) This ability to continue reaping the rich calories in milk was a selective advantage that allowed this individual to survive longer than others and produce more offspring, who then continued passing the gene on.

Darwin’s chief opponent was Jean-Baptiste Lamarck, with his theory of evolution by acquired traits. He argued that organisms acquire useful adaptive traits during their lifetimes and then pass those traits on to their offspring. One of the best-known examples of Lamarckian evolution was its theory about how giraffes developed their characteristically long necks. Lamarck theorized that early short-necked giraffes actively stretched their necks to reach the higher leaves on trees and, over several generations, slowly developed longer necks.(b)

The main difference between Lamarckian and Darwinian evolution was its cause. Darwin believed that evolution was random and passive, whereas Lamarck believed that organisms directed evolution through their life experiences and choices. Darwin and his supporters ultimately won the field and, as a result, the principle of evolution by natural selection has formed the foundation for all subsequent biological knowledge.

However, since at least the late 1950s, the debate has been more complex and less dichotomous, with most biologists believing that both nature and nurture play a role in development. In 1957, for example, esteemed biologist C.H. Waddington wrote that “the development of any individual is affected both by the hereditary determinants which come into the [fertilized] egg from two parents and also by the nature of the environment in which the development takes place.”2 Yet while scientists have understood for decades that interactions between genes and the environment steer an organism’s development, they have only recently begun to identify the mechanisms behind these interactions.

It is primarily the field of epigenetics that has shed light on the interaction between nature (genes) and nurture (environment). Epigenetics is concerned with how environmental factors can influence gene expression, the process by which genes create proteins, RNAs, and other molecules. As a scientific discipline, epigenetics refers to the study of changes in gene expression that are not caused by mutations in the DNA.

Comprehending epigenetics requires an understanding of the connection between genes and gene expression. If we think of the genes that make up the genome as the blueprints for an organism, gene expression is the execution of these blueprints. While an organism’s genes define its potential traits, the expression of the genes determines which traits are actively enacted.(d) The survival and proper functioning of an organism depends on a finely tuned interface between genome and environment, nature and nurture. The interface that regulates gene expression through environmental feedback is called the epigenome.3

The epigenome is made up of the RNA, proteins, and other molecules surrounding and interacting with the DNA. (Many of us have seen diagrams of the double helix structure of DNA, but we don’t always see these molecules coating the chromosomes.) Genetic material directs activity in an organism through the transcription of DNA to messenger RNAs (mRNAs), which are then translated into proteins that drive and regulate cellular activity.(e) The regulation of gene expression through epigenetic mechanisms can occur at any of these steps. Proteins and carbohydrates can be added to or removed from the DNA sequence, making certain genes more or less accessible to the machinery required to transcribe them to mRNA. The translation of mRNA into proteins is also subject to regulation by epigenetic mechanisms.

Methylation, the attachment of methyl molecules to the DNA, is an epigenetic mechanism for suppressing gene expression.

These gene regulatory networks are dynamic and constantly processing feedback from the environment in order to determine the optimal amount of mRNA and proteins to produce.3 While DNA mutations will permanently alter genes, and thus their expression, epigenetic changes can trigger temporary alterations in gene expression. Some epigenetic changes last only as long as a particular gene pathway and associated cellular activity is required.

For instance, certain human immune responses to specific viral, bacterial, or fungal pathogens are regulated by epigenetic mechanisms. One critical component of the immune response to viral infections is interferon gamma (IFN-γ), a molecule secreted by several types of immune cells to promote overall immune response to viral infections.(f) Secreted IFN-γ binds to receptors on the surface of its target cells and produces signaling cascades that eventually promote the transcription of several dozen genes necessary to combat the invading virus. These genes remain active for as long as they are needed, and once the virus is cleared, IFN-γ signaling stops and the genes return to their inactive state.4

While the epigenetic regulation of the immune system is constantly shifting in response to the pathogens an organism encounters, other epigenetic changes can last a lifetime and are essentially as irreversible as genetic mutations. One example of a permanent epigenetic change is X chromosome inactivation in female mammals. Male mammals have one X chromosome, while females have two. In order to avoid the overproduction of gene products controlled by X chromosomes in females, epigenetic mechanisms deactivate one X chromosome at random in each of the female’s cells.(g) The inactivated X chromosome is coated in carbohydrates and proteins that render it completely inaccessible to the gene expression machinery. This X chromosome is called the Barr body and it remains inactive for the life of the female. This is why calico cats, whose fur is a patchwork of multiple colors, are exclusively female. The color of each strand of fur depends on which X chromosome is activated in that patch. 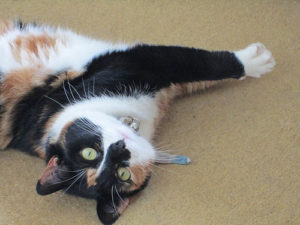 Now, when you see a calico cat, you will know that her multicolored coat results from alternating X chromosome inactivation.

Though not all epigenetic changes are as permanent as DNA mutations, they are heritable and can be passed down through multiple generations, a phenomenon demonstrated in laboratory mice. Mice require a certain degree of maternal care early in life for normal psychological development, and recent studies have shown that intermittent disruption of this care increases mice’s depressive and anxious tendencies later in life.5 Gene expression studies of mice subjected to disrupted maternal care have revealed abnormal levels of expression for several genes associated with atypical behaviors, such as anxiety and depression, in mice.

Furthermore, when male mice that had experienced disruption of maternal care mated with normal females, they passed down the epigenetic markers for increased depression and anxiety to their offspring. These offspring experienced a normal upbringing, but still possessed modified versions of the epigenome.4 These experiments not only shed light on the molecular mechanisms by which stressful early life experiences can influence psychological development, but also reveal the impact of these experiences through multiple generations.

While we have come a long way in our understanding of epigenetics and the interaction between genes and environment, it is clear that we still have much to uncover. The finding that life experiences can induce epigenetic changes in individual organisms and their offspring alters the way we think about the “nature versus nurture” debate. Our experiences not only help to define who we are, but also may impact the development of our offspring over successive generations.

Our growing understanding of epigenetics suggests that the theories proposed by Darwin and Lamarck are perhaps not as mutually exclusive as once believed. By acknowledging the interplay of nature and nurture that guides the development of an organism, perhaps we will be able to integrate inherited and acquired traits into a greater understanding of our own evolution.