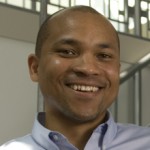 Odest Chadwicke Jenkins, Ph.D., is an Associate Professor of Computer Science at Brown University. His research addresses problems in robot learning and human-robot interaction, primarily focused on robot learning from demonstration, as well as topics in computer vision, machine learning, and computer animation. Dr. Jenkins was selected as a Sloan Research Fellow in 2009 and received the Presidential Early Career Award for Scientists and Engineers (PECASE). He has also received Young Investigator awards from the Office of Naval Research, the Air Force Office of Scientific Research, and the National Science Foundation (NSF). National Geographic recently featured him as an emerging explorer. Dr. Jenkins received a Ph.D. in Computer Science from the University of Southern California and an M.S. in Computer Science from Georgia Institute of Technology.