This article was also published in Quartz.

The August 1925 issue of Popular Science Monthly magazine featured an illustration of a “Wonder City” of the future (in this case, the “future” was 1950) by American architect Harvey W. Corbett. He envisioned a layered urban landscape with four separate street levels for pedestrians, slow traffic, fast traffic, and underground trains.Three years earlier, prominent Swiss architect Le Corbusier presented a similar proposal for a “Contemporary City” of 3 million inhabitants. It featured a network of elevated highways for vehicles spanning across large green areas exclusively for foot traffic.

Corbett, Le Corbusier, and other prominent architects of the early 20th century imagined the physical separation of pedestrian and automotive traffic as a defining feature of modern urban planning.(a) Yet this vision of an urban life in which pedestrians and mechanical traffic moved about in peaceful coexistence, each group within its own sphere of urban space, did not come to pass. The development of American cities in the ensuing decades went in a dramatically different direction, forcing pedestrians and vehicles to compete for the same territory – with vehicles overwhelmingly winning the battle. 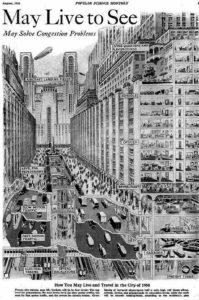 Architect Harvey W. Corbett’s vision of the future in 1925

Why did the development of U.S. cities prioritize cars at the expense of pedestrians? How can local communities counteract this trend and reestablish walking’s central role in urban life?

The Decline of Walking

Since mass-produced automobiles took command of American life a century ago, they  have become our primary means of personal transportation. An overwhelming 92% of people travel to their workplace by car, while less than 3% of commuters go on foot.1 Just 13% of children walk or bike to school, compared to 48% in 1969.1 Overall, walking, one of the most natural of human activities, has become shockingly rare in the lives of many Americans: Only two-thirds of adults report walking for more than 10 minutes at any time in the previous week.2

The dearth of walking in the U.S. is a matter of concern because how we move from place to place has significant health, social, economic, and environmental consequences. As outlined in my previous article for Footnote, walking is a powerful tool to improve physical and mental health, promote social connectivity and community engagement, improve neighborhood economies, and reduce environmental impact.(b) Walking deserves a much more prominent role in urban life than it currently enjoys.

The Rise of the Car Pushed Pedestrians to the Edge

The decline of walking is directly related to the automobile’s ascendance in American life. When cars were introduced into existing urban landscapes, they vied with pedestrians for limited space on old streets that weren’t designed to cope with an unlimited flow of motor vehicles. Cars – not to mention buses, trucks, vans, trams, trolleys, motorcycles, and bicycles – pushed pedestrians to the margins (or, more literally, the sidewalks). Cities that developed after the rise of the automobile followed this pattern, with private vehicles prioritized as the centerpiece of local transportation networks.

This transportation hierarchy is visible in the design of the sidewalk, the last domain of the pedestrian. Sidewalks are raised from the road just enough to provide a physical barrier that separates humans from vehicles, creating a permeable edge that allows people traveling on foot their own space to move about in the city with a reasonable degree of freedom. However, the road still takes precedence. It isolates buildings into city blocks, creating urban islands within the sea of vehicular traffic that flows around them. The road divides up the sidewalk, constraining movement on foot to the zigzagging, discontinuous paths permitted by traffic lights and pedestrian crossings.

We have created an urban landscape in which pedestrians are the weakest link among all the different modes of transit that converge and overlap, on a daily basis, in American streets. They account for nearly 15% of traffic fatalities,3 even though only 10% of all trips are taken on foot.1 They are the slowest moving and most physically vulnerable group traveling through urban space, but are often exposed mere feet from fast-moving vehicles and bicycles.(c) Pedestrians are also more vulnerable to environmental conditions such as weather and pollution, yet the sidewalk affords them little protection.

How Urban Geography Shapes our Movement

Our choices about how to get around are largely shaped by our environment and our perception of what it will be like to get from one location to another on foot, in a car, on a bicycle, or via some other vehicle. The main geographic factors that influence people’s transportation decisions are proximity – how close the start and end points of their journey are – and connectivity – how fast and convenient it is to move from one to the other.

Proximity is determined by the density of buildings, as well as the types of buildings in an area. In the U.S., cities with greater population density tend to have higher shares of commuters that walk (or bike) to work.1 But density alone is not enough: If housing is clustered together, but the residential block is located ten miles from the workplace district, then walking to work is still out of the question for most people. Proximity requires a compact mix of a variety of buildings types, so that the spaces for living, working, shopping, entertainment, and other activities are close together.

While proximity is about the location of places in relation to one another, connectivity is about the routes for traveling between those places. Connectivity increases as there are more – and more efficient – transportation and route options for moving from one point to another.4 Grid street layouts (i.e. sets of parallel vertical and horizontal roads that intersect at right angles) are ideal for connectivity, since they offer numerous short segments, in the form of city blocks, and frequent intersections for moving from one segment to another. On the other hand, the “suburban spine” pattern common on the outskirts of many sprawling cities – with major roads connecting enclosed residential areas cut off by cul-de-sacs and dead ends – makes moving from place to place more complicated.

Changing the Landscape to Encourage Walking

Proximity and connectivity are the product of choices about how to configure buildings, roads, and public transit. Government plays a large role in these decisions, both directly, through public transportation systems and road-building projects, and indirectly, through land use policies and zoning ordinances that constrain the actions of private real estate developers. Local government can wield this power to shape how the urban landscape develops and prioritize certain forms of transportation, such as walking.

As an architect and a member of my local zoning board in Providence, Rhode Island, I have encountered a number of ways that local regulations can be used to make American neighborhoods and communities more walkable.(d) Here are some possibilities:

1)    Support pedestrian-friendly spaces beyond the sidewalk.

The main public domain for pedestrians is the sidewalk, which is often linked to and in competition with the road. Pedestrian-only areas like city parks, public plazas, sports facilities, urban farms, nature paths, river walks, and urban trails offer alternative spaces where walking is the primary focus and pedestrians don’t have to compete with cars. When linked with sidewalks, these spaces can expand the walking infrastructure in a community.

In Providence, Waterplace Park and the Riverwalk, a pedestrian promenade, offer a pleasant alternative for moving through the city center on foot. They have also helped revitalize the downtown by hosting public art and community events.

2)    Increase proximity by zoning areas for a mix of land uses.

Traditional zoning regulations often establish single-use areas, dividing cities into separate residential, commercial, and industrial districts. The newer approach of mixed-use zoning encourages homes, offices, stores, and other destinations to be built near each other, improving people’s quality of life and promoting walking as a part of their daily routines. This approach to zoning may also improve health: A study of low-income women found that those who lived in mixed-use areas had lower rates of obesity and coronary heart disease risk than women living in single-use zones.

The Hunter’s Point South development currently under construction in New York City, for example, will include an integrated mix of affordable and market-rate housing, a waterfront park, a school, retail and commercial space, and community and cultural facilities. The project will also have streets designed with walkers and bikers in mind.

Plans for a walkable, mixed-used development at Hunter’s Point South in Queens, NY

Cities should encourage the development of walking networks that offer pedestrians multiple efficient routes for moving from place to place, as the grid street system does. According to a study of Seattle neighborhoods, when pedestrian routes are more direct and connected, compared to driving routes, people are more likely to choose their feet over their cars.

Changing the overall layout of a city’s walkway system is a long-term endeavor, but there are also changes that can be made in the short run if officials focus on how pedestrians can optimally move through the city landscape. The removal of fences and other barriers that unnecessarily block pedestrian routes, the establishment of more crosswalks, and the creation of shortcuts and paths to connect dead end roads can all encourage people to walk by creating shorter, more intuitive routes.

A Renewed Vision for Walkable Cities

As awareness of the many social and health benefits of walking grows, so does support for a different kind of city. Younger generations in particular are demonstrating an increased interest in urban living and the walkable lifestyle it affords. Young adults in the U.S. are driving less and walking and biking more, and surveys show that nearly two-thirds of them want to live in walkable neighborhoods with a mix of amenities.6

Though this shift in values is encouraging, it will achieve little unless the geography of cities is also transformed. Local governments and zoning boards have a critical role to play in cultivating urban landscapes that encourage walking. They can do so by supporting designated pedestrian areas, mixed-use zoning, improved pedestrian routes, and other principles discussed in this article. Community-based initiatives, like the Public Space and Public Health Initiative (PSPH) in Providence, can also contribute by designing and implementing neighborhood-level interventions.(e)

Visionaries like Corbett and Le Corbusier presented cities designed in their totality, an approach that enabled them to consider the ideal relationship among different parts of the urban landscape. However, while political and economic conditions may sometimes align to enable the creation of new cities from scratch, most urban development is a slower, messier, evolutionary process.(f) Existing structures are revised, new layers are built on top of old ones, and transformation often takes decades to implement. To create a future of more walkable, livable cities, we must begin by incorporating a vision of walkability into the urban planning of today. 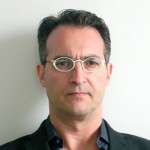