A robot returns from work at the car factory.(a) It goes home, does the laundry, waters the plants, and prepares dinner for its family. It reads to the 6-year-old until the parents come home, then goes to visit Grandma.

Does this sound like real life or a scene from a science fiction movie?

The truth is, it’s somewhere in between. We may not realize it, but automated machines — or at least their products — already surround us everyday. They are welding car parts in factories, harvesting lettuce on farms, and exploring space.(b) Robots even have the potential to save lives. Search-and-rescue robots and improvised explosive device (IED) hunters like the iRobot PackBot have served as first responders in war zones and emergency situations, including the hunt for the Boston Marathon bomber.

Robots are also assisting in our homes, with 2.5 million personal and domestic robots sold worldwide in 2011.(c) People are getting comfortable with an expanded place for robots in our lives: In a Swiss study, 71% of respondents said they could imagine living with a robot on a daily basis.1

Recognizing the increasing role of robots in society, the U.S. government launched the National Robotics Initiative (NRI) in 2011. In 2012, the National Science Foundation, National Aeronautics and Space Administration, National Institutes of Health, and U.S. Department of Agriculture jointly awarded $50 million to various research projects aimed at developing robots for use in medicine, home care, emergency rescue, and manufacturing, with more money to come in 2013 and beyond. According to its mission statement, the NRI is particularly interested in improving robots’ abilities to interact with humans in order to create “co-robots” that will act “in direct support of and in a symbiotic relationship with human partners.”

At the moment, robots’ social capabilities are limited. Human social skills that seem simple and effortless can actually be quite challenging to implement computationally. For example, if you stop someone on the street and ask, “Do you know the time?” she will check her watch. But a robot may respond much more literally, with a simple “Yes.” Robots also lack the human tendency to take another person’s perspective. A robot across the table may respond to the question, “Where’s the salt?” by stating it is on the left (i.e. the robot’s left) even though it is on the questioner’s right. Perhaps most troubling, robots have no clear way of making moral decisions, which could pose problems when presented with questions like, “Which of the two screaming voices under the earthquake rubble should I try to save first?”

The flip side of the question about robots’ abilities to interact with humans is: Are humans ready to interact with robots? In surveys, many people report that they lack the technological proficiency to effectively and safely operate robots.2 Others fear that robots will replace them at work or even turn against them.(d)

While we are a far cry from the self-aware, human-enslaving artificial intelligence (AI) made famous in the Terminator and Matrix movies, the safety, control, and ethical usage of robots are legitimate issues to ponder. What are the consequences of a robot harming a human? Is the government engaging in ethical use of drones and AI systems for surveillance? Should there be guidelines for the sale, purchase, or treatment of robots? Will robots take away our jobs? Can someone hack into a robot, as they would into a computer, but with greater potential for physical harm?

To address some of these critical questions, Footnote is publishing a series of articles examining the benefits and concerns that surround robotics and artificial intelligence technologies and their emerging role in society. Our contributors, hailing from diverse academic institutions and disciplines, approach these questions from the social sciences, natural sciences, philosophy, psychology, and computer science. Scholars have important perspectives to contribute to the conversation because they focus on big-picture problems and solutions that robot manufacturers and users may miss in their concern with short-term developments.

For instance, Matthias Scheutz, Director of the Human-Robot Interaction Lab at Tufts University, is “really worried about the societal consequences of social robots.”3 Given that people already name their Roombas, he asks, how can we prevent unhealthy attachments to more emotionally engaging, human-like robots?(e) Solutions need to be explored for programmers to ensure that robots behave appropriately, for manufacturers to make it clear that their robots are not sentient, and possibly for lawmakers to regulate robots’ behavior.

Political scientist Armin Krishnan is also concerned with how technology can affect the human condition. His research has focused on a potentially detrimental use of machines loosely considered robots: drone warfare.4 The proliferation of military drones has changed not only the means by which the United States conducts warfare, but also the strategies it considers ethical, such as targeted assassinations.(f) Drones are mostly remote-controlled missiles at this point, but the military is likely to further integrate man and machine through artificial intelligence and robotic technology.

Despite the potential ethical problems involved in creating robots, there are areas where it could be unethical not to enlist their help. A topic that has received particular attention among researchers is elder care. The number of people over the age of 80 is expected to double worldwide by 2030, leading to increased demands for living assistance.5 Smart homes and robot caretakers can help the aging population stay independent longer. In the health care field more broadly, promising developments include the creation of bionic limbs as well as robots that can aid in surgery, rehabilitation, and hospital service.

Robotic technologies hold immense promise to improve our lives in ways both large and small. How do we ensure that every population reaps the benefits? In an effort to address this question, Carnegie Mellon roboticist M. Bernardine Dias started the research group TechBridgeWorld to explore innovative technological solutions for underserved communities, such as people in the developing world and people with disabilities.

The next transformational revolution in technology is very likely to be in the domain of robotics. Will robotics development be driven by the business world, like the computer revolution, or will other parties step in? Perhaps progress can be steered by scientists and scholars who, like the contributors to this series, are committed to deliberating, debating, and testing ideas of progress. Rather than waiting until robotic technology evolves as a function of sheer market forces or the interests of a few powerful and rich individuals, scientists as well as ordinary people can take control of this evolution. They can guide it toward robots that fulfill existing needs rather than create new needs, work with humans rather than replace them, and expand our lives rather than restrict them. 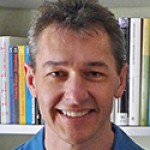 Bertram F. Malle was born and educated in Graz, Austria, before coming to the United States in 1990. He received his Ph.D. at Stanford University in 1995 and joined the University of Oregon Psychology Department. Since 2008 he has been a Professor at the Department of Cognitive, Linguistic, and Psychological Sciences at Brown University. He received the Society of Experimental Social Psychology Outstanding Dissertation award in 1995, won a National Science Foundation (NSF) CAREER award in 1997, and served as president of the Society of Philosophy and Psychology. Malle’s research has been funded by the NSF, U.S. Army, Templeton Foundation, and Office of Naval Research.