Thanks to new advances in DNA sequencing technology, the capacity for obtaining information about our genetic material is increasing at a rate faster than Moore’s law.(a)

The first human genome, which was completed in 2003, was sequenced at a cost of $2.7 billion dollars. Incredibly, it is now possible to sequence an entire human genome for less than ten thousand dollars, and this cost is expected to continue decreasing.(b) Now that it has become technically and economically feasible to obtain massive amounts of genomic data, a new set of challenges arises. In the pre-genomic era, researchers could sequence individual genes, but they had to pick likely candidates and could sequence only a handful. In the haystack that is the genome, a genetic mutation was the proverbial needle. Now that researchers can obtain information on every piece of hay in the stack, we know that each genome contains hundreds or thousands of these needles.

Although it is no longer difficult to find genetic mutations, researchers are now faced with the challenge of determining which ones have functional consequences in health and disease. The key to separating the important mutations from the genetic noise will be the ability to compare many hundreds of genomes in order to see which mutations recur in the context of particular diseases. Until recently, that kind of experiment was prohibitively expensive. Now, as the cost of sequencing has dropped, so too has the barrier to performing the kinds of comparative studies that should have a tremendous impact on our understanding and treatment of disease. 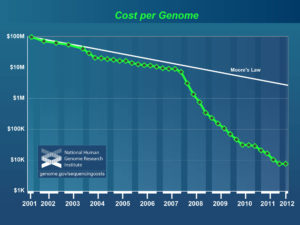 One of the diseases that will be especially impacted by low-cost, high-throughput sequencing is cancer. Genetics has long been central to our understanding of cancer. Inherited genes can increase a person’s risk of cancer and it is mutations acquired during the course of one’s life that cause a tumor to form, develop and, eventually, kill. Because of its strong genetic component and significant impact on public health, this disease has been a focus for applying new genomic technologies.

One major project, The Cancer Genome Atlas (TCGA), coordinates a national network of researchers to sequence multiple samples from 20 different tumor types in order to determine which genes are mutated in which cancers.(c) Mutations that are found in many samples from a given cancer are likely to play an important role in that disease and represent good potential targets for therapeutic intervention. While TCGA and programs like it examine the genetic variation across cancer types, other efforts are aimed at uncovering the genetic diversity that lies within a single tumor.(d) Two recent papers in the journal Cell document efforts to sequence DNA from as many as 58 individual cells within a single tumor in order to understand its unique genetic development.1 The hope is that these types of experiments will shed light on the order in which mutations are acquired, giving clues as to the importance and function of each mutation.

While these approaches are based on the idea that the more we understand about the genetic basis of cancer, the better we will be able to combat it, a third approach explicitly seeks to marry genomic knowledge and pharmacological response. In two recent papers in the journal Nature, scientists tested a wide range of drug treatments on large panels of cell lines(e) derived from diverse cancer types in order to link particular genetic signatures to patterns of drug response.2

In a way, the concept of linking mutational status to drug susceptibility is not new. For drugs such as Zelboraf, which was recently approved for use in melanoma, patients are screened for mutation of the drug target before being prescribed the drug.(f) The difference in these latest studies is that the cell lines were screened for mutations in hundreds or thousands of individual genes as well as large-scale changes in DNA structure and the production of RNA. By having information about a huge range of genetic changes instead of just the ones that are known targets of a drug, the researchers were able to find novel predictors of drug sensitivity that would not have been inferred from prior knowledge. Hopefully, as comprehensive analysis of tumor genetics becomes a common part of patient care, the information gleaned from these types of studies can serve as a guide, allowing clinicians to tailor treatment to each patient’s personal disease genome profile.