On Friday, U.S. senator and presidential candidate Elizabeth Warren called on the government to break up tech giants Facebook, Google, and Amazon, arguing that they are monopolies with excessive market power. Warren proposes that we treat massive online platforms as utilities that should be subject to regulation, just as our water and electricity companies are.

Warren is right that the tech companies that control vast swaths of our communication, commerce, and media have become so large and influential that they should be regulated to protect the public interest. But we shouldn’t regulate tech giants the way we manage traditional utilities like water and electricity, and simply breaking companies up won’t solve many of the most intractable problems, such as fake news, privacy violations, hate speech, and political bias.

What we need instead is a collaborative, multi-stakeholder approach to constraining tech’s power and tackling its biggest challenges. Traditional top-down, government-managed approaches to regulation like Warren’s are unlikely to be effective in the fast-evolving, globalized tech industry…

Read the rest of the article at Fast Company. This piece was produced by Footnote in partnership with the Eli Broad College of Business at Michigan State University. 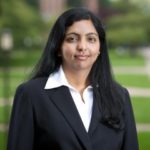