Over the past few decades, the modern American definition of family has expanded to include single parents, same-sex couples, live-in extended relatives, and other members beyond the nuclear family. But the animal kingdom has long boasted a diverse assortment of family units.

Birds are a prime example, with species that use a variety of strategies to care for their young. For instance, 9% of bird species, called cooperative breeders, include birds that don’t reproduce but instead live with and protect their extended families.1 On the other side of the spectrum, species called brood parasites opt not to care even for their own biological offspring and instead drop their eggs in other birds’ nests.2

A recent study published in Science sheds light on these unique reproductive strategies by analyzing the global distribution of superb fairy wrens, which are cooperative breeders, and cuckoos, brood parasites that target the wrens.1 Ecologists from Australia National University and the University of Melbourne found that fairy wren families with more extended relatives in their nests more effectively warded off the cuckoos who tried to freeload off them. The wrens appeared to be living in large units to create a stronger defense against brood parasites, so that their own families’ children got the attention they needed to thrive.

Upon a broader look, the scientists found that cooperative breeders like fairy wrens and brood parasites like cuckoos tend to cluster in the same geographic areas. A likely reason for this distribution is that cooperative breeding has co-evolved with brood parasitism as a defense mechanism.(a) Evidence for this conclusion is provided by observed differences between bird families in the same location that correlate with the level of threat posed by brood parasites. For example, in southern Africa, 28% of bird species targeted by cuckoos live in extended families, compared to only 8% of the species that do not have to deal with freeloaders. The proximity of the two types of breeders also appears to benefit the parasites by providing a stronger nurturing environment for eggs that make it through cooperative breeders’ lines of defense.

Hawaii’s albatrosses present another example of a bird species in which caretaking is not always provided by biological parents.4 Scientists recently discovered that about a third of albatross pairs on Oahu are of the same sex, a pattern particular to this island.(b) They were puzzled that most of these same-sex pairs were female, even though females with male partners produced more surviving offspring. 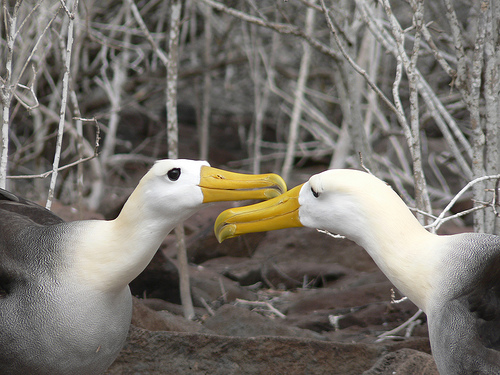 Courting albatrosses in the Galapagos

The reasons for this reproductive strategy became clearer when the researchers considered the sex imbalance of Oahu’s albatross population.4 Albatrosses recently migrated to the island from other colonies, and for whatever reason, many more females than males settled on Oahu. Since there were not enough fathers to go around for every egg on the island, the females developed a strategy in which they took turns co-parenting each other’s young. This way each bird, despite having fewer children, has help raising these children.

The albatross’ motive is clear: the arrangement is reciprocal, and each parent gets her turn to produce and rear biological offspring. But what about the wrens? Scientists have spent years asking why many animals show investment in the survival of individuals other than themselves and their own offspring. The concept of the selfish gene, coined by Richard Dawkins, offers a compelling explanation.(c)

According to Dawkins’ theory, a gene’s primary function is to propagate itself, not necessarily its owner.5 Natural selection favors genes that copy themselves and ensure that these copies survive to replicate again. These genes are not just in the host organism, but also in members of the organism’s family. For example, your siblings, parents, and children each have half your genes; your aunts, uncles, nieces, nephews, grandparents, and grandchildren each have one quarter; and your cousins have one eighth.(d)

This perspective on genes explains the development of kin selection, whereby an organism acts to contribute to the survival and reproductive success of family members, even at its own expense. The selfish gene may also explain animals that make huge sacrifices for entire colonies.(e) For example, when a predator approaches a prairie dog colony, one prairie dog will make a loud noise to warn the rest, putting itself at risk but saving its community – a community that likely contains many of its genes.7

When we discuss evolution, we often personify genes as having the goal and desire to replicate themselves. But genes don’t have intentions; they are simply subject to natural selection. In the case of kin selection, a behavioral trait that drives an organism to protect its relatives stays in the gene pool because, by encouraging the survival of organisms that are related to the carrier of the gene and therefore likely share that gene, it selects for itself. In other words, if a gene contributes to cooperative breeding behaviors, and family members who benefit from these behaviors share the gene, then this gene is more likely to propagate.

Putting the gene at the center has spawned new ways of thinking about evolution.(f) When Darwin first identified evolutionary principles like natural selection, the organism was the unit portrayed as striving to survive and reproduce. But cooperative breeding and other forms of kin selection suggest that evolution is more about survival of the fittest gene than survival of the fittest organism. From the gene’s perspective, the organism is merely a vehicle for its own survival and propagation.