The vast majority of young Americans – about 80% of women and 70% of men across races, classes, and family backgrounds – desire an egalitarian marriage in which both partners share breadwinning, housekeeping, and childrearing.1

In practice, however, egalitarian relationships are difficult to establish. Both work and family are “greedy institutions” that take up lots of time and energy.2 Many couples find that, once children arrive, it’s impossible for both partners to do both tasks with equal gusto.

With this in mind, sociologist Kathleen Gerson asked 120 American men and women between the ages of 18 and 32, 95% of whom were heterosexual, what type of family they would like if, for whatever reason, they couldn’t sustain an equal partnership. She discovered that, while heterosexual men’s and women’s ideals are very similar, their fallback positions deviate dramatically.

Men’s most common fallback position is to establish a neotraditional division of labor: 70% would hope to convince their wives to de-prioritize their careers and focus on homemaking and raising children. Women? Faced with a husband who wants them to be a housewife or work part-time, almost three-quarters of women say they would rather be self-reliant and able to support their kids on their own, even if this means divorcing or not marrying. In fact, despite men’s insistence on being breadwinners, young women are more likely than young men to say they value success in a high-paying career.3 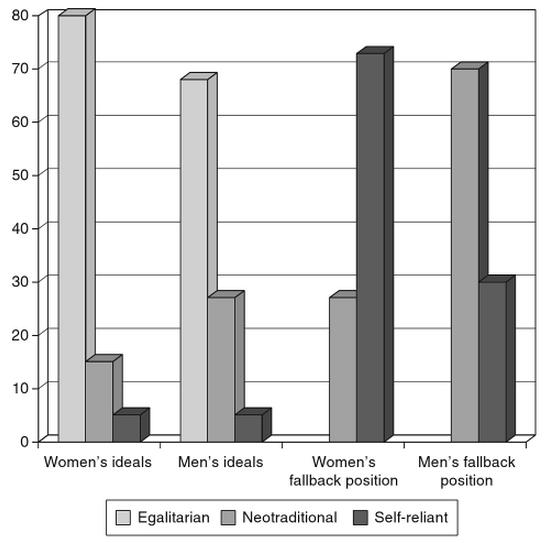 Gerson’s data with matching ideals on the left and clashing fallback positions on the right.

One of Gerson’s interviewees, Matthew, exemplifies the egalitarian man willing to fall back on a neotraditional family form:

If I could have the ideal world, I’d like to have a partner who’s making as much as I am—someone who’s ambitious and likes to achieve. [But] if it can’t be equal, I would be the breadwinner and be there for helping with homework at night.

And this response typifies what many heterosexual women she interviewed think of that:

My mother’s such a leftover from the fifties and did everything for my father. I’m not planning to fall into that trap. I’m really not willing to take that from any guy at all.

Alas, what appears to be a happy convergence between heterosexual men’s and women’s ideals – both are egalitarians – can turn into an intractable situation if an equal marriage isn’t attainable: a man who won’t give up his role as the breadwinner and a woman who would rather do anything than be a housewife.

An earlier version of this article was published on the blog Sociological Images. 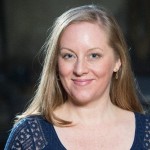 Lisa Wade is a sociologist based in Los Angeles, California. Currently an Associate Professor and Chair of the sociology department at Occidental College, Lisa’s work involves inspiring her students and the public to think sociologically.