In 2008, a Congressional investigation exposed disturbing details about financial relationships between Dr. Charles B. Nemeroff, a prominent Emory University psychiatrist, and the pharmaceutical industry. Nemeroff failed to disclose at least $1.2 million in consulting payments from drug companies. Of particular concern was the $800,000 Nemeroff earned from GlaxoSmithKline (GSK) from 2000 to 2006 – just before he received a $9.3 million federal grant to study Paxil, an antidepressant manufactured by GSK.

A more tragic case of physician conflicts of interest involves 18-year-old Jesse Gelsinger, who died while undergoing experimental gene therapy as part of a University of Pennsylvania study. It was later revealed that Dr. James Wilson, one of the researchers overseeing the study, held a patent for the therapy and a 33% financial stake in a company that stood to benefit from positive findings in the trial – relationships he failed to disclose to either Gelsinger or the university.(a)

Incidents like these highlight the ethical problems that can arise when medicine and industry mix. Though most cases are not as extreme as the ones involving Dr. Nemeroff and Dr. Wilson, financial relationships between physicians and the pharmaceutical and medical device industries are commonplace, with billions of dollars flowing from companies to physicians each year. A 2007 study found that 94% of physicians self-reported “some type of relationship with the pharmaceutical industry,” most commonly free meals (83%) or drug samples (78%). 28% reported receiving money from companies for promotional work, consulting, or recruiting patients for clinical trials.1

Even seemingly benign interactions with private companies can subtly influence medical decision making. Research suggests that small benefits, like free lunches or medication samples from pharmaceutical companies, exert a subconscious influence on physicians, making them more likely to prescribe a particular company’s product.2 Conflicts of interest also occur at the institutional level.3 Doctors speaking out about the adverse effects of particular drugs have, in some cases, been censured or even fired by hospitals that receive grant funding from the pharmaceutical companies in question.

How can we discourage doctors and companies from unethical relationships that cloud clinical decision making? How can we equip patients to make informed decisions with disclosures about industry connections their doctors may have?

A groundbreaking law, the Physician Payment Sunshine Act (PPSA), attempts to shed light on the problem by requiring pharmaceutical, healthcare, and medical device companies to disclose all payments they make to physicians and teaching hospitals.(b) The law also established the Open Payments Database, a massive, federally-managed collection of data on physician-industry financial ties that launched in September of this year.

Because disclosure is mandatory, the Open Payments Database offers an unprecedented amount of information about physician-industry relationships.(c) The initial wave of data reveals that, over the course of the last five months of 2013, $3.5 billion flowed from the hands of industry to doctors and teaching hospitals.4 The biggest spenders (according to a subset of data that contains identifying information) were biotechnology firm Genentech, medical device maker DePuy Synthes, and pharmaceutical company Pfizer.

In addition to providing a clearer overall picture of physician-industry relationships, the Open Payments data can be used to identify specific cases of ethical concern involving particular doctors, hospitals, and companies. Proponents of the PPSA believe that such transparency will help hold offending parties accountable and deter others from potential ethical breaches.(d) The database may also help patients make more informed decisions, for example, by finding out whether their doctor might have an extra incentive for prescribing a particular treatment. 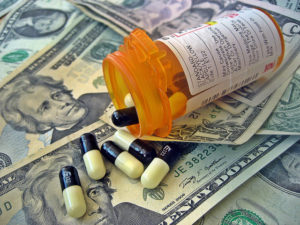 In the second half of 2013, $3.5 billion in payments flowed from industry to physicians and hospitals.

The problem is that it can be difficult for patients to know which relationships should be cause for concern. Clearly, not all connections between doctors and companies are unethical. In fact, some offer tremendous benefit, advancing research and promoting the translation of academic discoveries into technologies that can benefit patients. Unfortunately, the Open Payments database leaves out the details necessary to make the distinction between benign and troubling physician-industry relationships.5 As the database itself states, “Open Payments does not identify which financial relationships are beneficial or which may cause conflicts of interest.”(e)

Take the common practice of companies donating pharmaceuticals for clinical trials. The PPSA requires disclosure of the market value of any donated drugs, even for federally-funded studies backed by the National Institutes of Health (NIH). These donations are listed as research payments flowing from the company contributing the medication to the physician managing the study, even though the physician does not personally profit from the donated drugs.

To see how this could be misleading, consider sofosbuvir, the new once-daily hepatitis C treatment that has been capturing headlines both for its effectiveness and its high price tag. The retail value of this drug is $1,000 per dose, and a course of treatment lasts 12 weeks. A physician who enrolls even ten patients in a trial of donated sofosbuvir would be listed in the database as receiving $840,000 in research payments from Gilead, the drug’s manufacturer, although the physician sees no direct personal gain from the donation.

This distorted reporting runs the risk of discouraging physicians from participating in clinical studies and dissuading companies from donating drugs, potentially blocking research with significant social and scientific importance. It also obscures issues of real ethical concern, since the high price of expensive drugs can dwarf the size of more troubling payments such as gifts, meals, and consulting fees. There is also the risk that the general public will misinterpret the data, avoiding physicians whose only “ethical breach” is managing a clinical trial for an expensive drug.5

The PPSA is a major step in the right direction, with the potential to prevent medical conflicts of interest and foster better-informed patients. But the need for transparency must be balanced against the possibility of people misinterpreting the data, and the danger that such misinterpretation may stymie important research. Several changes to the Open Payments database could help balance transparency and accuracy, including requiring companies to provide context about payments, modifying the reporting procedures to create more detailed payment categories, and educating patients on how to use the data to make better healthcare decisions.

Though the flood of payments from companies to physicians is unlikely to dry up anytime soon, exposing the money trail will make it much easier to identify and avoid situations where a doctor’s financial incentives collide with the best interests of their patients. If done right, transparency can protect patients while allowing positive physician-industry partnerships to flourish.

Stephanie Morain is an Assistant Professor in the Center for Medical Ethics and Health Policy at Baylor College of Medicine. She conducts both empirical and normative research into issues at the intersection of ethics, law, and health policy. Her work examines political and ethical issues concerning the scope of government authority in public health and the role of stakeholder opinion in shaping decision-making in public health policy. Dr. Morain received a Ph.D. in Health Policy with a concentration in Ethics from Harvard University and an M.P.H. from the Program in the History and Ethics of Public Health at Columbia University. She completed her postdoctoral training as a Hecht-Levi Post-Doctoral Fellow at the Berman Institute for Bioethics at Johns Hopkins University.