In early November 2009, a Boeing 727 crashed on takeoff near the town of Tarkint in northern Mali, or so the initial reports indicated. Closer scrutiny of the crash revealed a web of connections that typify the ever-metastasizing menace of drug trafficking in Africa, both as a destination point and a transit route to Europe and North America.(a)

The Boeing 727 found in northern Mali was registered in Guinea-Bissau but was operating with Nigerian crew under a leasing agreement in Venezuela. The same aircraft also operated regular flights between Colombia and Mali, with drugs as cargo. According to leaked U.S. embassy cables, high-ranking Malian authorities were involved in the episode and initially attempted to cover up the so-called “drug plane” incident.

The Tarkint affair brought to the fore the problem of drug trafficking in Africa, a phenomenon that if left unchecked poses serious challenges to state institutions in the region. The brazen nature in which the drug traffickers disposed of the plane is just as shocking as the fact that a section of the Malian security apparatus was implicated in the operation. Similar cases of state officials’ involvement in drug trafficking have been reported in Kenya, Guinea-Bissau, and South Africa, among other African states. In Kenya, very senior members of the police force, a number of sitting members of parliament, and prominent business people have been implicated in the narcotics trade, with some of the suspected traffickers being blacklisted by the U.S. Treasury.(b) The former commissioner of the South African Police Service, Jackie Selebi, was convicted of taking bribes from a drug smuggler. The list of African “narco-states” is getting longer, with potential for disastrous consequences.

To highlight the rapid rise of drug trafficking in the region, consider the fact that between 1998 and 2002, the amount of drugs seized across Africa averaged less than 1 metric ton annually. By 2006 this figure had shot up to about 16 metric tons per year.1 The saturation of the North American cocaine market in the wake of the failed “war on drugs” has prompted Latin American traffickers to set their sights on the European market.2 To this end, West African states have proved to be useful transit points for moving their illicit cargo to Europe. Corruption, state incapacity, and outright state capture by drug cartels have all created safe passages, linking the European streets with the coca producing regions in Latin America. Nearly 60% of the cocaine consumed in Western Europe – with a street value of almost U.S. $18 billion – transits through West Africa.3 West African states implicated in the drug trade include Guinea, Guinea-Bissau, Mali, Mauritania, Niger, Nigeria and Senegal (See Figure 1). 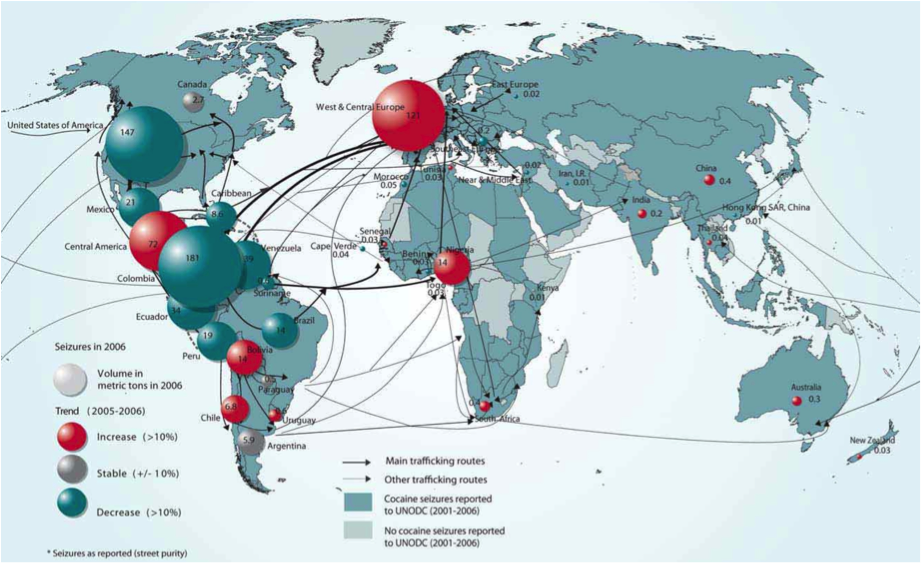 Eastern Africa has not been spared from the menace of drug trafficking. A recent report from the United Nations Office on Drugs and Crime (UNODC) indicates that the region has emerged as a key transit point for drugs from Southwest Asia and South Asia – with India, Iran, Myanmar, Pakistan, and Thailand being the major sources of heroin bound for European markets (See Figure 2).4 A quick survey of the U.S. Treasury’s list of foreign nationals suspected to be drug traffickers reveals several Kenyan passport holders with links to the Middle East and South Asia, an indicator of the growing importance of South and West Asia as sources of drugs. Latin American drug cartels have also tried to infiltrate the Eastern African transit route. Details of such operations were recently aired in the media when the new Venezuelan ambassador to Kenya was found strangled in Nairobi; some speculated it was because she questioned the use of diplomatic pouches (which are not subject to inspection at airports) to smuggle drugs from Venezuela. 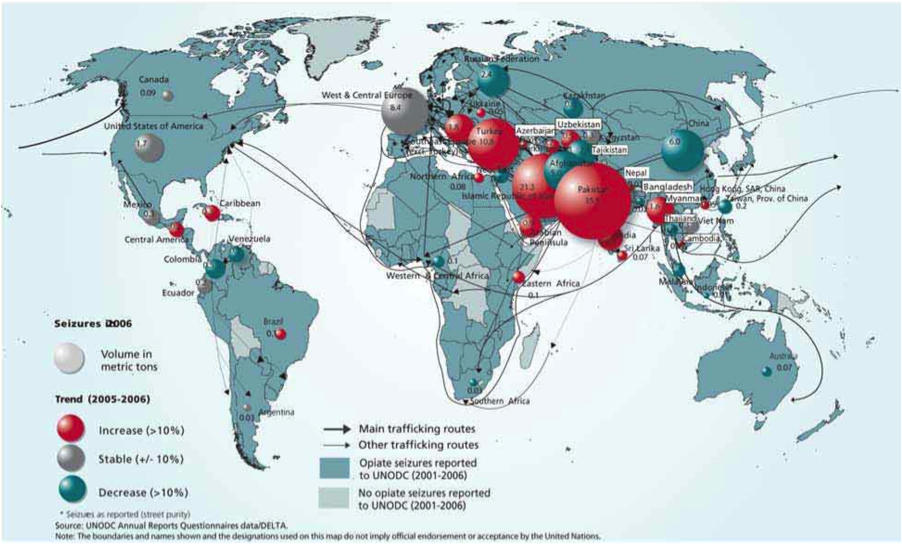 The problem of drug trafficking in Africa is not merely a law enforcement concern. Firstly, it is a threat to the development and consolidation of important state institutions, especially the region’s judiciaries and security agencies. In many of the African states that have been cited as important transit destinations for drugs from Latin America and Asia, drug traffickers have managed to infiltrate vital state institutions. Important politicians, members of the judiciary, and key members of the security apparatus – both police and the military – have been their primary targets. As a result, the very institutions that have been charged with policing such illicit activities have been the ones that actively promoted and/or provided protection for drug traffickers. Ineluctably, the large amounts of drug money up for grabs have caused splits among ruling elites, sometimes resulting in bloody conflict, as has been the case in Guinea-Bissau since early 2009.

Secondly, drug trafficking is emerging as a threat to international security. Drug runners both in Western and Eastern Africa have been linked to terrorist groups operating in the Sahel and in the Horn. Drugs smuggling routes through the Sahara desert are an important revenue source for Islamist groups like Al Qaeda in the Islamic Maghreb (AQIM).(c) Following the Mali “drug plane” incident, UNODC Executive Director Antonio Maria Coasta linked the drug trade to, “’terrorists and anti-government forces,” in the Sahel, saying that the groups use drug money to fund their operations. In Eastern Africa, drug lords have been linked to similar groups in Somalia. Many of those blacklisted by the U.S. Treasury on suspicion of being drug traffickers have also been adversely mentioned as key financiers of East African terrorist groups like the Al-Shabaab in Somalia.

Over the last two and a half decades, state collapse in Africa was often associated with civil wars. Somalia, Sierra Leone, Liberia, and the Democratic Republic of Congo all imploded in the wake of peripheral insurgencies that overwhelmed already fragile nations lacking in state capacity.5 In the last decade, however, drug trafficking has emerged as an equally formidable threat to state institutions in the region. Of concern is the fact that these threats are not limited to the poster children of civil unrest and state collapse, like Guinea-Bissau, Somalia, or Liberia. Drug traffickers have infiltrated key institutions even in comparatively strong and stable states like Kenya and South Africa. As is the case in Latin America, violence and organized crime have often accompanied the flow of drugs. If “conflict resources” defined the African civil wars of the 1990s, “conflict drugs” might yet emerge as a new source of intra-elite squabbles and conflict.(d)

Guinea-Bissau is an illustrative case. On March 1, 2009 both the army chief, General Batista Tagme Na Waie, and President Joao Bernardo Vieira were killed as a result of what many suspected to be a drug-related feud. General Na Waie died in an explosion at the army headquarters while the president was shot hours later as he tried to flee the presidential palace. In the previous year’s general elections, opposition leader Kumba Yala had publicly called President Vieira the country’s, “biggest drug dealer.” Guinea-Bissau has not seen stability since. A string of coups, the last one in April of 2012, motivated by both political rivalry and competition for rents from the drug trade have defined Bissauan politics since.6 Drug traffickers have captured large segments of the Bissauan state security apparatus. Uninhabited islands off the coast of the country are routinely used as landing grounds for drugs from Latin America before shipment to Europe either by sea or through the Sahara desert.

Will Africa Become the Next Central America?

The globalization of terrorism over the last decade has created a situation in which the number one threat to international security is no longer strong, conquering states, but failing ones that provide safe havens for terrorist organizations. Drug trafficking in Africa reflects the heart of this concern. The illicit trade is both contributing to the deterioration of state institutions – which could result in state collapse – and financing terrorist groups like AQIM and Al-Shabaab. So far the international community has not treated the matter with the urgency it deserves. The consequences of inaction will be dire, as has already been seen in Central America. The region’s misfortune of being an important transit route between South American cocaine production centers and North American consumers has resulted in the highest murder rates in the world, fueled by transnational organized crime and drug trafficking. The statistics are astonishing: Among 20-year old men in some Central American countries, 1 in 50 will be murdered before they are 32.(e) Africa, a region already replete with weak states, might be next if drug trafficking on the continent continues to grow. 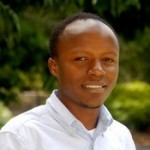