Colin Allen is Provost Professor of Cognitive Science and of History and Philosophy of Science in the College of Arts and Sciences at Indiana University, Bloomington, where he has been a faculty member since 2004. He also holds an adjunct appointment in the Department of Philosophy and is a faculty member of IUs Center for the Integrative Study of Animal Behavior and Program for Neuroscience. He became director of IUs Cognitive Science program in July 2011. Allens main area of research is on the philosophical foundations of cognitive science, particularly with respect to nonhuman animals. He is interested in the scientific debates between ethology and comparative psychology, and current issues arising in cognitive ethology. 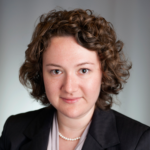 Alisa Jno-Charles is a Ph.D. Student at Indiana University’s Kelley School of Business. Her research focuses on the relationship between startups, media, image and identity. Jno-Charles also has over a decade of private equity, public markets, and real estate industry experience. She co-founded the startups Oz and Papertrailer. Jno-Charles holds a Bachelor’s in Finance and an M.B.A. from Babson College.