This article was produced in partnership with Northeastern University.

A year ago, a group of scientists led by Dr. Kim Lewis, Director of the Antimicrobial Discovery Center at Northeastern University, announced a major breakthrough. They had identified a new antibiotic, teixobactin, capable of destroying several kinds of bacteria, including antibiotic-resistant strains of tuberculosis and staph (i.e. MRSA).1

Antibiotics are so familiar to us that the discovery of a new one may not seem particularly groundbreaking. Yet in reality, most antibiotics were identified over a half-century ago and new discoveries are quite rare. Teixobactin is actually “the first new antibiotic to be discovered in more than 25 years,” according to the White House.

After a “golden age” of discovery in the 1940s, 50s, and 60s, antibiotic development faltered.2,3 The drugs that were easiest to identify and cultivate (the “low-hanging fruit”) had already been found, incentives in the scientific community steered research in other directions, and antibiotics were not seen as profitable by pharmaceutical companies.(a) 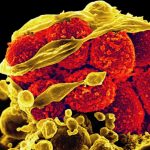 Meanwhile, bacteria began to develop resistance to existing antibiotics. The dreaded MRSA (methicillin-resistant Staphylococcus aureus) arose in hospitals and healthcare facilities, while overuse of antibiotics in livestock farming fostered resistant strains of Salmonella and E. coli. According to the CDC, antibiotic-resistant illnesses now infect 2 million Americans and kill 23,000 each year.

In this context, the identification of a new antibiotic that can avoid resistance is major news. Yet what elicited even more excitement in the scientific community than the discovery itself was how teixobactin was discovered. Researchers found the compound using an innovative reinvention of an old technique responsible for many of the antibiotic discoveries of mid-twentieth century: digging in the dirt.

In the early days of antibiotic development, most compounds were found by combing soil samples for microbes that produce their own antibiotic chemicals to keep competing bacteria at bay. This soil mining resulted in a number of powerful antibiotics, such as the tetracyclines used to treat everything from Lyme disease to acne. However, once the compounds that were easiest to find and grow in a lab had been identified, the pace of discovery slowed.2

Dr. Lewis and his colleague at Northeastern, Dr. Slava Epstein, reinvigorated soil mining by inventing a device, the iChip, that makes it possible to grow bacteria that could not be cultivated through previous techniques. The iChip grows uncultured bacteria in its natural environment, opening up the possibility for research on the 99% of natural bacteria that cannot be cultured in a lab.(b)

Developing systems like the iChip that enable exploration of large numbers of potentially antibiotic compounds may be the key to fighting antibiotic-resistant diseases. According to Dr. Lewis, the lack of drug candidates is the primary bottleneck in the antibiotic discovery pipeline. Without promising lead compounds, there is nothing for medical researchers and pharmaceutical companies to test and refine for human patients.

To address this bottleneck, we need to devote resources to developing platforms that allow researchers to identify large numbers of potential antibiotics.(c) “Right now,” says Dr. Lewis, “people have kind of a lottery approach to the problem. Some group accidentally stumbles onto an interesting compound and tries to develop it. In very rare cases it’s successful. In most cases, it simply fails.”

In lieu of this single compound approach, Dr. Lewis and others have advocated a shift to developing platforms that provide a foundation for antibiotic discovery.2 For instance, researchers like Dr. Helen Zgurskaya at the University of Oklahoma are trying to determine “rules of penetration” to guide the identification of antibiotics that can successfully penetrate the bacterial cell envelope, a major barrier to drug delivery.(d)

While identifying rules of penetration is the type of foundational work that paves the way for important discoveries, it is often overlooked by scientists and funders. According to Dr. Lewis, however, it is exactly this kind of platform development that will be essential in our fight against antibiotic-resistant bacteria. While efforts to reduce the use of antibiotics in agriculture and prevent the development of resistant diseases are important, at the end of the day we need more antibiotics to address the threat head-on.

“We are in a stand-off with human pathogens. And we are poised to lose,” Dr. Lewis wrote in a 2012 essay in Nature calling on the scientific community to “recover the lost art of antimicrobial drug discovery.”2 If we don’t want to wait another 25 years for our next groundbreaking discovery, we need to cultivate platforms and technologies like the iChip that will pave the way for a new generation of antibiotics.