Nearly one in ten Americans served in World War II. Households across the country hung service flags in the window to honor family members at war, the blue star on the banner replaced by a gold one if the soldier was killed.

Fast forward seven decades and the direct impact of war now affects a much narrower swath of society: active duty soldiers and their immediate family members currently make up just 1.2% of the U.S. population.(a) While this trend may make the burdens of war less visible, they are no less real. As scholars Alison Howell and Zoë H. Wool highlight in a paper for the Costs of War project, “The difficulty of military deployment always extends beyond the battlefield,” affecting soldiers’ children, family members, friends, and especially spouses and partners.1

Howell and Wool’s research also suggests that the unique condition of America’s post-9/11 military engagements is straining soldiers and their families in different, and possibly more intense, ways than previous conflicts. Compared to earlier wars, the conflicts in Iraq and Afghanistan have entailed longer, more frequent deployments and intense combat exposure. Though research is still limited, it suggests that the longer soldiers are away from home and the more dangerous their tours of duty, the more likely it is for the stress and trauma of war to return home with them. Among the most affected are military spouses and partners, who must cope with emotional stress, relationship strains, increased familial responsibilities, financial difficulties, and other challenges.(b)

The most obvious stresses on military spouses occur when their loved ones are deployed abroad, as they worry about their spouses’ safety while shouldering a large share of family responsibilities on their own. Though the day-to-day experiences of bearing these burdens are poorly captured by statistics, the numbers do show that the nature of current deployments is a strain on military spouses. Based on data from 2003 to 2006, shortly after the wars in Afghanistan and Iraq began, the New England Journal of Medicine reported that women with deployed husbands were more likely to have received a mental health-related diagnosis (most commonly depression, anxiety, sleep disorder, or acute stress reaction) than those whose husbands were not deployed.2 Not surprisingly, the longer a husband’s deployment, the more likely a military wife was to have a diagnosed mental health condition. 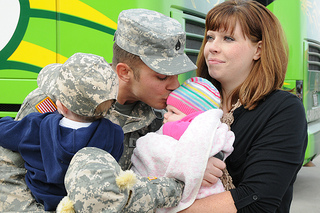 A Staff Sergeant in the Army National Guard returns home to his family in September 2012.

The challenges continue after loved ones return home from battle. Service members are returning from Iraq and Afghanistan with acute and chronic physical injuries and disconcertingly high levels of mental and behavioral health issues, ranging from post-traumatic stress disorder (PTSD) to suicidal thoughts and behavior. Soldiers may avoid discussing traumatic war experiences with their spouses and partners in order to protect them, but silence can have its own negative impact on relationships. While the long-term effect on military marriages and relationships is not yet clear, data show that since 2000, the percentage of service members whose marriages end each year has been increasing (in all branches of the service except the Air Force).3

In some cases, relationship stress can turn violent, particularly among soldiers recently exposed to intense combat situations. Past research has demonstrated somewhat higher levels of domestic violence in military relationships and this may be exacerbated by the trend of longer, more frequent, and more dangerous deployments in the post-9/11 era.  A recent study of service members returned from Iraq shows that soldiers exposed to intense situations such as, “violent combat, killing another person, and contact with high levels of human trauma,” are more likely to participate in a range of risky behaviors, including verbally and physically aggressive acts toward others.4

In addition to challenges in their relationships, military spouses have to deal with obstacles to developing their own careers and maintaining financial independence.(c) In many cases, they serve as the primary support system at home both during and after their partners’ deployment. In addition to the emotional and psychological toll this role entails, it also involves unpaid work and numerous moves around the country, making it hard for spouses to build their own careers. 54% of military spouses are 30 or younger and less than half are employed, meaning they are often financially dependent on their husbands and wives.3 Even though military wives are, on average, younger and better educated than married civilian women, they are less likely to be employed, more likely to be looking for a job, and, if employed, are often paid less than comparable civilians.5

Being married to a member of the military has never been easy, but the intensity of post-9/11 military action is bringing a new manner of emotional, physical, and financial stress into military families.(d) As the economy continues to suffer and the military struggles to provide adequate support services for both mental and physical needs, spouses are often left responsible for the care of their loved ones.6 Programs that facilitate family “readiness” for soldiers’ returns may be construed as trying to shift the burden of care from the military to spouses and other family members. Military spouses – most of whom are women – “serve” their country in numerous informal, unpaid ways and the impact on them represents a significant but often unrecognized cost of the wars in Iraq and Afghanistan.