When a suspect is put in the back of a police car or a judge lowers her gavel to pronounce a sentence, the perpetrator may not be the only one about to lose something. In many cases there is a child back home who is being deprived of his or her parent.(a)

The U.S. Department of Justice estimates that 2.3% of American children and 6.7% of African American children currently have a parent in prison, while more have a parent in local jail or have had a parent incarcerated in the past. Though some of these children had little involvement with their parent to begin with, others face the trauma of being separated from one of their primary caregivers.(b) In addition to the tangible and intangible challenges this separation entails – emotional stress, changes to living situation, loss of family income – children who have an incarcerated parent can face stigma and societal expectations that they will follow in their parent’s missteps. It’s easy to imagine that losing a parent to the prison system could have a major impact on a child.

A new study1 published in the journal Criminology by Joseph Murray, Rolf Loeber, and Dustin Pardini uses data from the multi-decade Pittsburgh Youth Study to examine how parental incarceration affects children.2 The analysis shows that boys who have a parent (mother or father) incarcerated at some point during their childhood are more likely to engage in criminal activity, in this study measured by acts of theft. These boys are more likely to steal than boys from similar backgrounds whose parents have not been incarcerated.(c) Interestingly, boys who have a parent arrested or convicted of a crime but not imprisoned are not more likely to steal, suggesting that the impact comes from having a parent incarcerated, not having a parent who is a criminal. While parental incarceration raises the likelihood of theft, it doesn’t increase other negative behaviors like marijuana use, poor school performance, or depression.

The finding that children whose parents are incarcerated are themselves more likely to engage in criminal behavior is supported by a number of other studies.3 Yet instead of accepting the old maxim, “The apple doesn’t fall far from the tree,” as a foregone conclusion, researchers and advocates interested in breaking the cycle are trying to understand why children of incarcerated parents are at higher risk. Is there a genetic predisposition that passes from parent to child, or do the parents model antisocial behaviors that are picked up by their children? Maybe criminals can be good parents but lack the resources to help their children succeed? Or maybe a child’s increased risk isn’t rooted in his parent’s behavior but specifically in the parent’s incarceration and its aftereffects? Perhaps it all starts when the cruiser door closes or the judge’s gavel bangs down?

The Pittsburgh Youth Study provides a unique opportunity to examine these questions because it tracks a large number of boys over many years and offers a look at their lives both before and after their parent’s incarceration. For the boys in the study, an increase in theft clearly follows their parent’s imprisonment. As you can see in the graph, other boys to whom they were very similar before the incarceration do not see a spike in theft around the same time. Analysis shows that changes in the boys’ family and peer environments after parental incarceration – such as less parental supervision and closer association with delinquent peers – account for about half of the increase in theft among the boys. While this still leaves half of the effect unexplained, it suggests that imprisonment itself may be one of the main reasons parental criminal behavior is passed on to children.

With 1 in 100 American adults now incarcerated, the impact on the 1.7 million children they’ve left behind is cause for serious concern.(d) Even if incarceration is reducing crime today (a proposition that’s less certain than it seems), it may be sowing the seeds for problems in future generations. 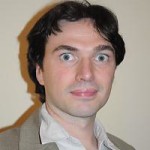 Joseph Murray is a Wellcome Trust Research Fellow and Senior Research Associate in the Department of Psychiatry at the University of Cambridge. His research focuses on the development of criminal tendencies over the life course, the childhood origins of antisocial behavior, and the impact of parental incarceration on child development. He is currently investigating biological, psychological and social influences on antisocial behavior in two birth cohort studies in Brazil and one in Britain. Dr. Murray has a doctorate in criminology from the University of Cambridge.