The U.S. is one of the only developed nations that doesn’t guarantee workers paid leave to care for a newborn child or a sick family member. 182 out of 185 countries around the world provide some form of paid maternity leave, and 70 countries also offer paid paternity leave, while the U.S. guarantees neither.1 As a result, just 12% of American workers have access to paid family leave through their job.2 For the rest, taking time off to care for a sick family member or bond with a new child can result in financial hardship, workplace penalties, or even the loss of a job.

President Obama recently launched a campaign to expand access to family leave for workers across the country.(a) But a handful of states, including Rhode Island, are already leading the way with their own programs. Paid family leave, known in Rhode Island as Temporary Caregiver Insurance (TCI), ensures people have the capacity to take time off work to care for their family by providing partial replacement for lost wages and, in Rhode Island, guaranteeing their jobs will be available when they return.

California was the first state in the U.S. to implement state-sponsored paid family leave in 2002, followed by New Jersey in 2008 and Rhode Island in 2013.(b) How is paid family leave (PFL) working in Rhode Island and other early adopter states, and how might it be improved? Our research evaluates evidence about the effectiveness of state-sponsored paid family leave programs. While studies indicate that PFL has health and financial benefits for families as well as potential economic benefits for states, the data suggest that some workers benefit more than others. Adjusting how benefits are calculated could make PFL more accessible to the low-income families who need it the most and who are most likely to go on public assistance – and thus cost the state tax dollars – without it.

For the 88% of American workers who don’t have access to paid family leave,(c) taking time off to care for a family member can mean losing their job or facing workplace discipline or sanctions.4 Even for workers who are permitted to take time off, the leave is almost always unpaid.(d) Losing a job or taking unpaid leave from work has both immediate and long-term economic consequences for families. In the short run, households must survive on a drastically diminished budget, a particular problem for those who are barely in the black to begin with. Even if a worker eventually finds a new job, research shows that spells of unemployment significantly decrease future wages.5 Given these challenges, government-sponsored PFL can be a tool to foster security both for families and for the economy as a whole. 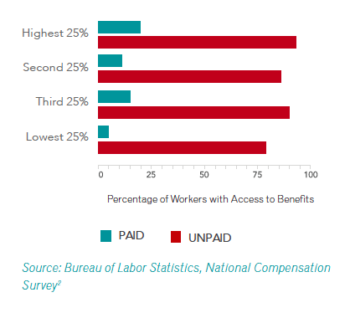 Research demonstrates that paid family leave pays off for workers and their families. After taking PFL, California families overwhelmingly report experiencing better economic, social, and physical health than those with a new child or sick family member who did not take PFL.6 Receiving care from family members has been shown to drastically improve health outcomes and recovery from illness, especially among children and the elderly.7 Mothers who take paid leave to care for a newborn breastfeed for twice as long, a behavior that has been connected with improved childhood health.6

Paid family leave also improves economic outcomes. A Rutgers University study reports that women who take paid leave after the birth of a child are 93% more likely to have a job nine to twelve months later and 54% more likely to report higher wages one year after giving birth than women who could not take leave.8 For the state, that means more workers paying taxes and contributing to the economy, and fewer people on social welfare programs.(e) New mothers who are able to take PFL are 39% less likely to go on public assistance and 40% less likely to receive food stamps after the birth of their child, compared to mothers who cannot take leave.8 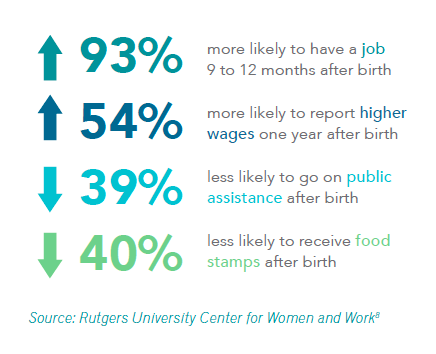 In Rhode Island, objection to the passage of paid family leave legislation came primarily from the business community.10 However, research on PFL in California6 and New Jersey11  suggests that employers have generally been happy with the effect of the program. The vast majority of businesses in California reported no negative impact – and in some cases a positive impact – on “productivity, profitability, or performance.”6 Some employers in New Jersey witnessed improved worker morale. Some businesses applaud PFL as a cost-saving measure because it reduces employee turnover, thus saving employers from hiring and training replacement workers.11

The paid family leave programs(f) in Rhode Island, California, and New Jersey provide between four and six weeks of income replacement at up to two-thirds of a worker’s normal wages. In each of these states, PFL is structured as an extension of Temporary Disability Insurance (TDI),(g) a program that provides short-term wage replacement for people who miss work due to non-work-related illnesses or injuries. The PFL program expands this coverage to people who miss work because of a family member’s health needs, rather than their own.

All three states fund PFL through an employee payroll tax. Funding the program in this way ensures that the beneficiaries (workers) pay for it, rather than placing the burden on employers. While having workers fund the program makes sense, the particular structure of the employee contribution system is, in practice, regressive, in that it places a greater burden on low- and middle-income workers. Like some other programs funded by payroll taxes, such as Social Security, PFL is funded through a fixed tax rate applied to a worker’s taxable earnings up to a specific income level, above which the tax is no longer applied. In Rhode Island, for example, the PFL and TDI programs are funded through a joint 1.2% tax on a worker’s first $64,200 in income.(h) The combination of the flat tax rate and the income cap means low- and middle-income workers end up paying a greater percentage of their earnings to fund the program than high-income workers (see Figure 5).

Despite the fact that low-income workers contribute a disproportionate amount of their paychecks to fund the program, they are less likely to utilize PFL than high-income workers. The most recent data from California, where PFL has existed the longest, shows that individuals earning below $24,000 a year account for less than 20% of PFL claims.13 On the other hand, individuals earning over $84,000 a year account for more than 20% of PFL claims, a share that is growing. However, according to the Census’s Current Population Survey for 2013, individuals earning over $84,000 a year make up just over 12% of the population of California whereas over 40% of workers in the state make less than $25,000 a year.(i) The data suggest that paid family leave is drastically underutilized by those who need it most – the working poor.14 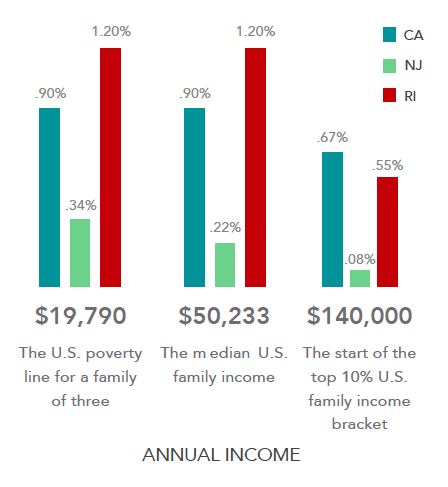 Why Does Paid Family Leave Benefit Some Workers More Than Others?

Low-income workers contribute a greater share of their salaries to fund PFL, but may be using the program less than high-income workers. Why? One reason may simply be lack of awareness about the program. Despite overall growth in the utilization of PFL,  more than half of workers in New Jersey15  and California6  were unaware of their state’s PFL program or their eligibility for it. Furthermore, income level was highly correlated with awareness of the program: lower-wage workers in California were far less likely to know about the availability of PFL or the fact that they pay into it.6

A more troubling problem is that many low-income workers may be unable to afford to take leave, even when they have access to a state-sponsored partial reimbursement. Existing PFL programs provide less than two-thirds of a worker’s missed wages. As Figure 6 shows, for Rhode Island families already living in poverty, losing a third of their income may simply leave them with too little to make ends meet. The maximum PFL benefit for a full-time, minimum-wage worker in Rhode Island with two children is $192 per week, which is 50% below the poverty line.(j) Most likely, workers like these simply cannot afford to take time off, even with the 60% wage replacement provided by PFL. If taking time off is unavoidable, it might make more sense for a worker to quit their job and apply for state aid than to take PFL. In Rhode Island, only full-time workers earning more than $15.86 per hour receive PFL benefits that put them above the U.S. poverty line (assuming a family of three that includes a single parent and two children). 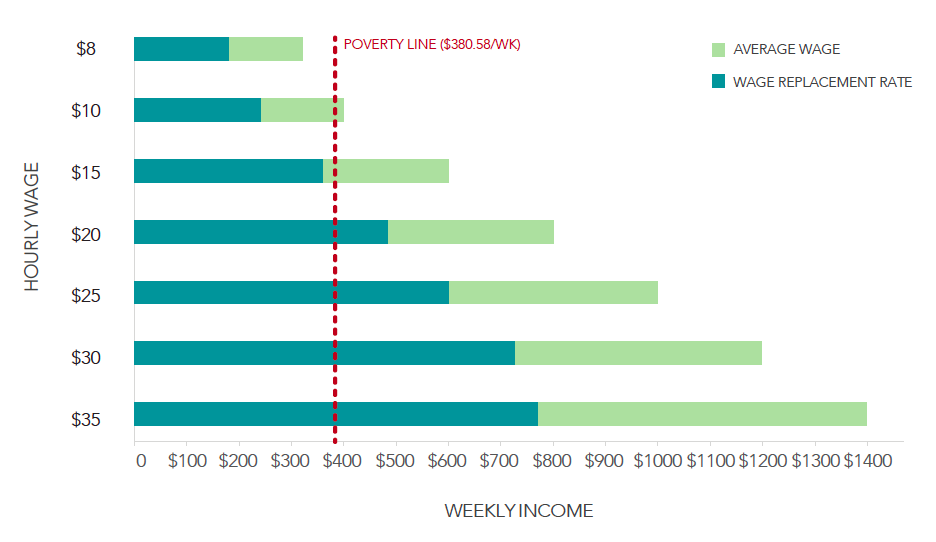 led the nation in addressing this issue by passing paid family leave policies that help workers take time off to care for their families.

These states can continue to lead the way by ensuring that low-income workers benefit from PFL (which they help pay for), so that it isn’t a program that taxes them more while benefitting them less. As the group most at risk of losing their job or winding up on state assistance without PFL, low-income workers should be a high priority for states trying to protect their economies.

There are several measures that could help increase the use of the PFL program among the working poor, and therefore maximize the economic benefits of PFL to the state economy. A statewide education campaign, with a particular focus on low-wage workplaces, could increase utilization by educating workers about the program and their entitlement to benefits. The state could also consider requiring all employers to provide information about PFL to workers.

Perhaps more importantly, implementing a more progressive wage replacement system so that lower-income workers who take PFL receive a higher level of benefits could ensure that no one falls below the poverty line as a result of taking paid family leave.

Given that low- and middle-wage workers are those who both need PFL the most and who pay the largest portion of their salary into the program, it is essential that these workers can afford to take advantage of it. Ensuring all workers have access to PFL could also be a smart economic move for the state. It could keep people employed and reduce social service reliance during times of family crisis, and lead to higher earnings, and thus more tax revenue, in the long run. 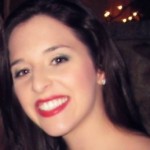 Rachel-Lyn Longo is a recent graduate of the University of Rhode Island and holds a B.A. in Political Science and Psychology. In the future, she plans to continue her research in public policy. 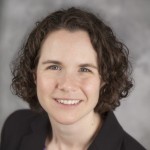