Over the past decade, pundits have been lamenting the decline of American manufacturing and debating how to reinvigorate industry. At the same time, the rise of the so-called knowledge economy(a) has put the spotlight on the critical role that knowledge and innovation play in fueling job and wealth creation and promoting sustainable economic growth.1

The new knowledge economy is characterized by a significant increase in the contribution of service sectors, including information technology, education, science, technology, and finance, to the Gross Domestic Product (GDP) and employment.2 As the knowledge economy has grown over the past three decades, the contribution of manufacturing to the GDP and total employment has significantly declined.

Can the U.S. – and hard-hit states like Rhode Island – revitalize manufacturing?

The Industrial Revolution marked the rise of manufacturing and radically improved production methods, leading to an era of economic progress and development never experienced before on the planet. The spread of manufacturing and mass production created the conditions for a significant increase in living standards for ordinary people.3 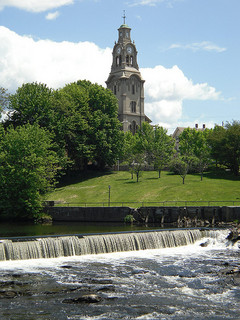 History shows that Rhode Island was an important player during the Industrial Revolution, and its economy benefitted accordingly. In the late 18th century, the state was at the frontier of advanced manufacturing and reaped the benefits of innovation and technological progress that took place across the region. The Blackstone River Valley in Rhode Island and Massachusetts is known as the birthplace of the Industrial Revolution in America. Businessman Samuel Slater of Pawtucket, who created technologies and a business model adopted by textile mills across New England, is often called the father of American industry. Slater’s mills significantly contributed to the creation of wealth, jobs, and economic development across the region.(b)

Fast-forwarding to the early 1960s, manufacturing activity was still a major engine of both job and wealth creation. According to data from the Bureau of Economic Analysis, manufacturing accounted for about 30% of the GDP in Rhode Island and 29% of the U.S. GDP. However, in the 1970s and early 1980s, technological change, together with market forces such as global competition and production reorganization, caused a major structural shift. The U.S. transitioned from an economy intensely focused on manufacturing to a service-oriented economy, redefining the role of manufacturing in Rhode Island and the rest of the country.4 This shift has caused many to fear that there is no future for U.S. manufacturing because of America’s higher labor costs, stringent labor standards, and strict regulations.

In this new landscape, competition in national and global markets for manufactured goods has been fierce and has caused a relocation of production to places where labor and transportation costs are lower (see figure below) and where the overall business environment is conducive to manufacturing activity.(c) The consolidation of traditional industrial powerhouses like Japan and Germany, together with the rise of mega industrial centers in China, Hong Kong, South Korea, Singapore, and Taiwan, changed the manufacturing marketplace.5 The effect was particularly pronounced in Rhode Island: Economists from the National Bureau of Economic Research found that Providence was one of the cities most vulnerable to competition from low-wage Chinese manufacturing between 1990 and 2007. 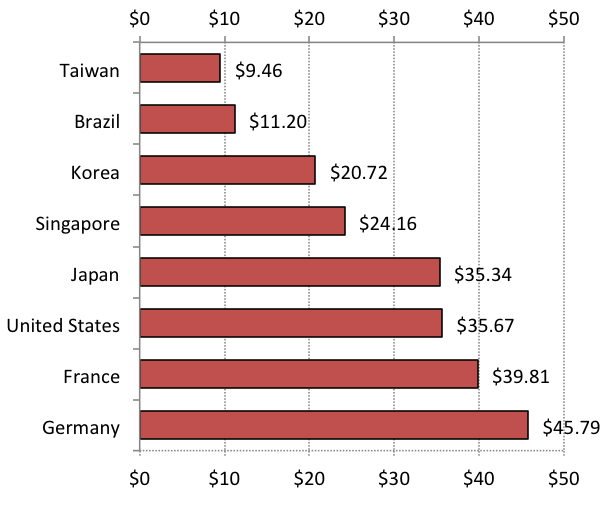 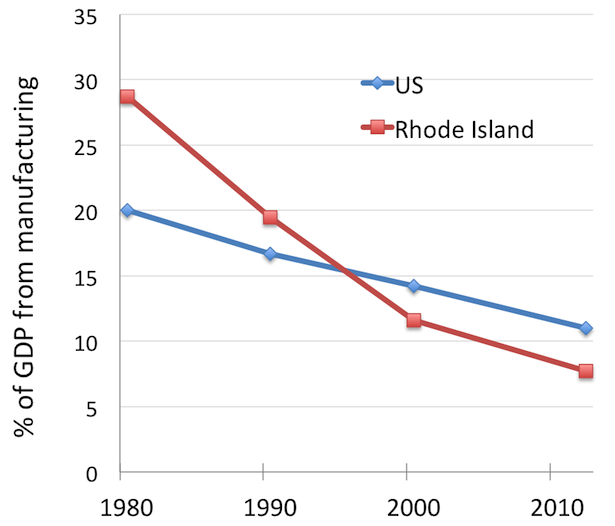 The Promise of Productivity

The role of manufacturing in Rhode Island’s economy, as well as the nation’s, has undeniably diminished over the past several decades. Could this decline have been avoided? More importantly, can it be reversed?

The truth is that the bleak figures about job loss and declining share of GDP tell only half the story. The good news from the manufacturing sector over the last few decades is a steady increase in productivity, that is, in the amount of economic value produced for a given amount of inputs.7 Because productivity growth – the ability to do more with less – is the engine of long-term economic expansion, manufacturing continues to be an important driver of growth in the United States.1 Productivity in manufacturing has also been increasing at a faster pace than in other sectors of the economy. From 1987 to 2007, productivity grew, on average, 3.7% per year in manufacturing compared to 2.3% in other (non-farm) business sectors.8

Productivity growth could give U.S. manufacturing an advantage over international competitors.(d) While other countries may have lower labor costs, America’s capabilities in product development and innovation can offer a competitive edge through the development of labor-saving technologies. But while productivity growth may increase manufacturing revenue and worker compensation, the creation of new jobs is unlikely to proceed at the same pace. Productivity gains and labor-saving technologies like industrial robots create wealth by producing more bang for a buck, but don’t necessarily require hiring more workers. Manufacturing will, however, contribute to job creation via its indirect impact on other sectors of the economy, particularly service sectors that create the human capital (education), research, and innovation to drive manufacturing productivity.(e)

There is a great deal that leaders at the national level and in states like Rhode Island can do to promote productivity growth and innovation in manufacturing. Promising efforts include education and training to facilitate human capital development, support for research and development across the economy, and regulations and reforms that improve the local business climate.9 As leaders determine which policies and programs to pursue, they must weigh multiple, sometimes competing goals. Is the aim to create more blue-collar jobs or foster high tech and professional jobs that support advanced manufacturing? Is increasing wealth (GDP) and growing the manufacturing sector valuable even if it does not produce new jobs?

It is up to policymakers, business leaders, and the community to decide what the priorities should be for government-led efforts to revitalize manufacturing. But when it comes to determining what specific policies to implement and anticipating how they will work, academics have a great deal to offer.(f) Extensive economic research exists on the impact of policies and programs designed to foster manufacturing in different economic climates. By examining what strategies have succeeded in other states and countries, policymakers can better understand how to reinvigorate the manufacturing sector. 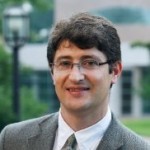 Edinaldo Tebaldi joined the faculty of the Department of Economics at Bryant University in 2007 and serves as the Director of the Center for Regional and Global Economic Studies at Bryant University. He also serves as the Rhode Island forecast manager for the New England Economic Partnership (NEEP). Dr. Tebaldi received his Ph.D. in economics from the University of New Hampshire with a concentration in Economic Growth and Development and International Economics. He is an expert in applied econometrics and currently teaches Econometrics, Economic Growth, and International Economics at Bryant University. Dr. Tebaldi has also worked as a consultant in the area of economic development for the World Bank, published several articles in scientific refereed journals, and co-authored a number of reports analyzing regional economic conditions.