Every day, socially conscious shoppers are picking out the perfect apple at the farmers’ market or going a little out of their way to purchase a book at the mom-and-pop bookstore downtown. These consumers understand that handing over (sometimes a little extra) money to their neighbors offers valuable support to local businesses.

What some people may not understand, however, is that the $20 they spend on a novel contributes much more to the local economy than just the price of the book. Local vendors are more likely to spend that money at other local businesses and keep it circulating within the community. But while people and organizations are becoming more aware of this “multiplier effect” of local spending, small businesses still struggle to compete with large corporations that not only offer potentially lower prices, but also spend significant amounts of money on advertising and market research.(a) A small, local painting crew simply can’t compete with a national contractor when trying to win a contract at a major university. Or can it?

To address this question, we conducted research on the local purchasing practices of two large higher education institutions in Rhode Island: Brown University and Roger Williams University. We analyzed purchasing data and conducted interviews with university administrators to understand the obstacles and opportunities involved in buying from local vendors and identify strategies for promoting local purchasing. We also surveyed purchasing managers from prominent companies in Rhode Island.1

Our findings indicate that the purchasing decisions of major institutions like universities have the potential to make a significant impact on local economies, and that there are a number of promising ways to encourage local purchasing.

The Power of Local Purchasing

Over the past few decades, local businesses have faced competition both from “big box” stores like Target and Walmart and from the outsourcing of work to other countries, first in manufacturing and now for services such as data analysis and customer relations.(b) While big box stores can create jobs and outsourcing can provide cheap goods to retail outlets and consumers, both serve to increase profits primarily for large companies.2

Cultivating a strong local business sector, on the other hand, has numerous benefits for local economies and citizens.3 Money spent at local businesses stays in the local economy much longer, as local vendors are more likely to spend that money at other businesses in the community – for services such as accounting and advertising – than national chains that pay for these services through their corporate offices.4 In addition, local businesses are more likely to support their communities through charitable contributions and civic involvement.5

Small local businesses also provide economic resiliency and create jobs.6 Nationally, small businesses accounted for the majority of net job growth from 1990 to 2003, and, even during the recent recession, the number of jobs at small businesses remained steadier than at large firms.7 Large companies create jobs as well, of course, and sometimes with higher pay and benefits.8 Existing research does not suggest that states should halt efforts to attract large companies, but it demonstrates that small businesses rooted in the community can also have a substantial positive economic impact. Buying local is one way to support these businesses – and consequently the local economy – in the face of outsourcing, the growth of large corporations, and other economic challenges.

The Movement to “Buy Local”

The benefits of local purchasing are clear; the challenge is to convince buyers of these long-term benefits, particularly when purchasing from local vendors may entail somewhat higher price points and slightly more inconvenience in the short term. Fortunately, organizations and consumers are becoming more aware of the benefits of local purchasing. This is evident in the adoption of “buy local” campaigns, the development of local investment clubs, and the enormous growth of the local food movement.

Anchor institutions – large, locally based nonprofits such as universities, hospitals, sports venues, and cultural centers – can play an important role in promoting local purchasing. Because of their size and resources, these institutions have a significant impact on the local economy, serving as major employers and purchasers.(c) Anchor institutions also tend to be inextricably linked to their geographic locations, which gives them an incentive to invest in the community. The local spending practices of influential anchor institutions can also set the tone for the choices made by other organizations in a community.9

Why Organizations Do – and Don’t – Buy from Local Vendors

Our research examined local purchasing trends in Rhode Island. In our interviews and surveys, many universities and other organizations in the state reported that the benefits of purchasing locally include higher-quality products and quicker delivery. For example, many food purchasers spoke not only of the superior quality of the produce but also of the reduced environmental footprint created by buying local food. Local purchasing also helps organizations improve their image, maintain consistency with mission statements related to community development, and fulfill affirmative action policies that focus on small minority- and women-owned businesses. 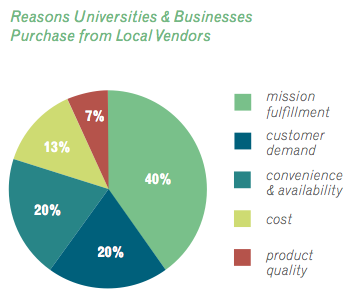 Despite the recognition of these benefits by universities and other organizations, local purchasing appears to be less common in Rhode Island than in some other states, likely due to our relatively small size. Many organizations we interviewed and surveyed consider purchases in Massachusetts and Connecticut to be “local” (although we only included purchases from Rhode Island vendors in our study). Other obstacles to local purchasing include higher price points for local goods and limitations in existing contracts with large distributors that bulk purchase goods and rarely source local products. 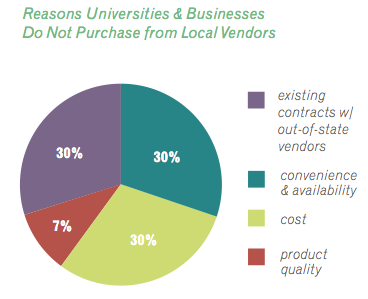 To understand the purchasing activity of higher education institutions, we obtained and analyzed 2013 purchasing data from Brown University and Roger Williams University. The data do not cover all local purchases by the two universities (for example, spending by individual academic departments is not included), but still show a significant amount of money is being spent with local vendors. Annual local purchasing by Roger Williams totaled $9.7 million in 2013. In the seven months from July 2013 to January 2014, Brown University spent $36.7 million at local businesses, including $3 million on locally sourced food. For comparison, Brown’s operating budget for 2013 was $865 million.

The main sectors where Roger Williams and Brown made local purchases were construction, food, and the service sector, including trade services (i.e. clerical work, trash removal, etc.) and program services (professional services related to the universities’ teaching and research programs). These trends support the argument made by some experts that services and non-durable goods are the low-hanging fruit to focus on when establishing local purchasing policies and initiatives.4

We measured the impact of the universities’ local purchasing on Rhode Island’s economy using a local economic multiplier, which is intended to capture the way that money is spent and re-spent within a community.(d) The multiplier estimates that for every $1 of local spending by higher education institutions, $1.94 recirculates in the Rhode Island economy. (For comparison, multipliers for other kinds of spending in various regions of the country range from $1.20 to $3.07.) Based on this estimate, the $46.4 million in local purchasing we documented at just two universities induces an additional $43.6 million in other areas of the state’s economy, resulting in a net total economic contribution of $90 million.

There are a number of policies and programs that might increase local purchasing. As our research demonstrates, universities and other large organizations spend significant amounts of money that could be channeled into the local economy. Higher education institutions, hospitals, large nonprofits, and state and local government agencies can revise their procurement policies to track spending with local vendors and give preferences to qualified local businesses.(e) Efforts to increase local purchasing by major government and nonprofit institutions could focus on the areas where barriers to local purchasing are already low, such as construction, food, and business services.

Government and nonprofit organizations can also work to remove existing barriers to local purchasing, such as the low public profile of local vendors and the complex bureaucratic requirements that often surround contracting. Brown University, for example, has made targeted efforts to increase opportunities for local vendors, with a specific focus on minority- and women-owned businesses. The university worked with the state to host events linking Brown’s major contactors to small, local trades companies. They also held information sessions for small businesses on how to meet Brown’s licensing and insurance requirements.

Multiplying the Power of Buying Local

One of the companies benefitting from Brown’s outreach to local vendors is Heroica’s Painting, a minority-owned family business that has been awarded 12 direct contracts with the university’s facilities management department since 2009. Heroica’s, in turn, gives back to the community by donating to a local nonprofit that trains minority youth in the construction business. This pay-it-forward chain of benefits embodies the multiplier effect of buying local and shows how targeted efforts to encourage local purchasing can benefit a number of stakeholders, from purchasers and vendors to the broader community.

Given the economic and civic benefits of a strong local business sector, it is certainly worth exploring opportunities to increase local purchasing. For decades, tax breaks and other incentives have been used to attract large national corporations; initiatives encouraging local purchasing might also offer a way to drive growth from within a state. Organizations and consumers should also understand how choices about where money is spent can influence their state’s economic and civic strength. By supporting other local businesses, creating resiliency in times of economic hardship, and promoting civic development, strong local businesses ultimately benefit the entire community. 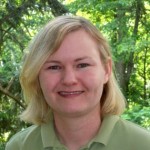 M. Dawn King is a Visiting Assistant Professor at Brown University’s Center for Environmental Studies. Her areas of research and writing focus on urban agriculture and local food economies, and she serves on multiple committees for the Rhode Island Food Policy Council. 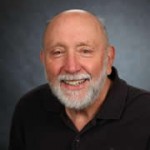 Joseph A. Ilacqua, Ed.D., Professor of Economics at Bryant College, specializes in Economic Transition, Economic Education, and Economic Impact Study. He has done far-reaching research and intervention in these fields in America and the former Soviet Union.