This article was produced as part of The College & University Research Collaborative, an innovative project to bring academic research and expertise to Rhode Island policymakers.

The “greatest generation,” the baby boomers, and generation X have been joined by a new American generation: the millennials. This group of 75 million people born in the 1980s and 1990s1 thrives on flexibility, is comfortable with the latest technology, and gravitates toward an urban lifestyle.(a)

More than a quarter of Rhode Island’s population is comprised of millennials ages 15 to 34, including many of its 88,000 college students.2 Almost 40% of residents living in the state capitol, Providence, belong to this generation.2

In a small state with an aging population, mil­lennials are an important group to attract and retain as residents.(b) Businesses are looking for tech-savvy workers with scientific and techni­cal skills who can stay up-to-speed in a rapidly changing world. Millennials also have the educa­tional background many employers are seeking, as they are more likely to have an undergraduate or postsecondary degree than adults from earlier generations.6 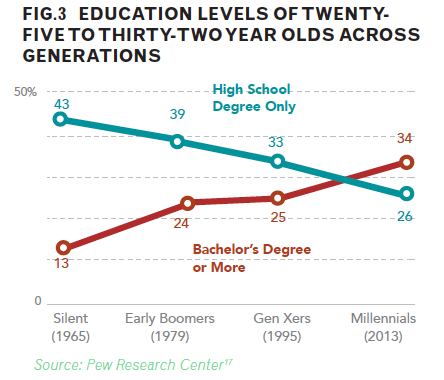 Given the important role millennials will play in Rhode Island’s economic future, what can the state do to become a more attractive place for them to live and work? One promising approach is to develop a transportation infrastructure that suits the millennial lifestyle, providing flexibility and supporting the active, urban way of life these young people value.

Transportation factors heavily into where mil­lennials choose to live: According to a study by the Transportation Research Board, urban young adults without children make these deci­sions primarily based on whether a city is “easy to get around,” with “plenty of public transit op­tions available.”7 Nearly two-thirds of millennials report a preference for mixed-use communities with a variety of businesses and entertainment options clustered together.5

How well does Rhode Island’s transportation system meet the needs of millennials? What can the state do to make its system more millennial friendly? 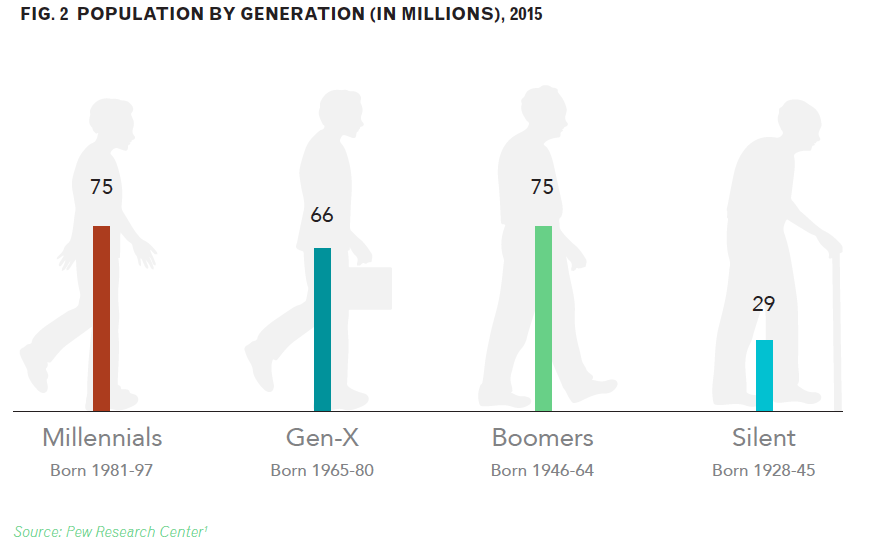 The Transportation Habits of Millennials

Though millennials are a diverse generation, some general trends have emerged regarding their transportation preferences. They are walk­ing, biking, and taking public transportation significantly more than people their age did a decade ago.(c) Today, 20% of millennials use public transit at least once a week, compared to 7% of Generation Xers and 10% of baby boomers.8 They are also driving less and are less likely to own cars or have driver’s licenses.(d) On average, 77% of millennials drive to work, compared to 92% of Generation Xers and 90% of baby boom­ers.7 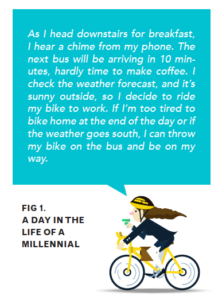 Though environmental concerns and lifestyle preferences certainly play a role, a major factor behind this shift in transportation habits is eco­nomic. Urban millennials report that they make transportation choices based primarily on cost and convenience.7 High levels of unemployment since the recession and the financial strain of pay­ing off college loans have held some millennials back from buying cars, as has their tendency to delay marriage, childbirth, and home ownership.8

Technology is also playing a role in millenni­als’ transportation habits. Their generation was the first to come of age immersed in the digital world, and they tend to be tech-savvy and de­vice-saturated as a result.3 Millennials may prefer to use public transit because it allows them to work or connect online during their commute, a service some transportation authorities are be­ginning to provide.(e)

Smart phones and a plethora of apps also support flexible and varied transportation choices.8 Mil­lennials can access public transit locations and schedules or look up the most efficient biking or walking routes on their phones. When they do need a car, they can locate a shared vehicle through Zipcar, find a rideshare on social net­working sites, or hail a car via Uber.

A New Vision for Transportation Planning

How can Rhode Island adapt its transportation infrastructure to address the millennial-led shift away from cars and toward walking, public tran­sit, and biking? As it stands now, the vast majority (77%) of Rhode Island’s transportation funding is allocated to highway construction and mainte­nance. Infrastructure projects that support an ac­tive millennial lifestyle are granted smaller sums: 4% for bicycle and pedestrian paths, 5% for rail transport, and 14% for bus services.9

At the national level, policy makers and trans­portation experts are adopting a more holistic approach to evaluating transportation system performance and identifying funding priorities.10 The Federal Highway Administration, Federal Transit Administration, and other divisions with­in the U.S. Department of Transportation have shifted from prioritizing throughput – the num­ber of people or vehicles that can be transported by a system – to valuing other factors related to quality of life, system efficiency and accountabil­ity, and environmental and economic impacts.11 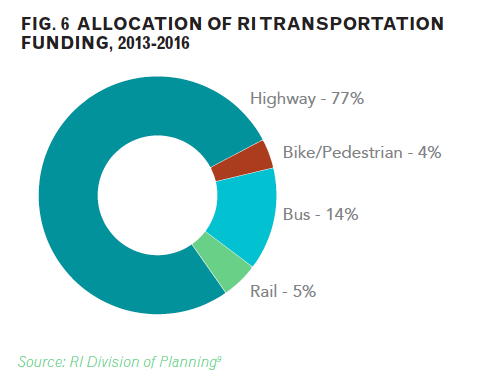 This system performance approach expands the nature of transportation planning. Agencies make decisions about highway funding based on not only the number of cars that can drive on a road, but also strategies for reducing congestion, pro­moting safety, and decreasing carbon emissions.11 A public transit project to increase local bus ca­pacity might also focus on issues such as what routes buses take, whether they reliably arrive at scheduled stops on time, what energy sources the buses run on, and whether they are accessible to all riders.

The shift to a more holistic, performance-based approach to transportation planning and funding aligns with the interests of millennials moving away from driving and toward more accessible, affordable, and varied transportation options. Rhode Island is beginning to echo this change in mindset, and, in fact, is required to move in this direction in order to continue receiving fed­eral funding.(f) As the state gears up to review its transportation projects for the next four years, the Rhode Island Department of Transportation (RIDOT) has recognized that the old system of defining and rating projects is inadequate and is transitioning to a system-performance view aligned with the new federal requirements.(g) As part of this effort, they have outlined system level goals and created new offices to track perfor­mance and support planning.12

Although the great majority of Rhode Island’s transportation funding still goes to roadways and bridges, the state has implemented some projects that align more closely with millennials’ needs. Construction is nearly complete on the Washington Bridge Bikeway and Linear Park, a pedestrian and bicycle path along the 195 Washington Bridge. This project will provide easy access to the East Bay Bike Path from downtown Providence and India Point Park, itself a much-beloved loca­tion where millennials are drawn to exercise, relax, and socialize. A pedestrian bridge is also in the works to connect the eastern and western banks of downtown Providence. The bridge will offer a Providence River crossing for walkers and bikers between the South Water and Point Street Bridg­es, while also carving out attractive park space on either shore.

The state also recently channeled additional fund­ing toward the RIPTA bus system, although some see this as more of a stopgap measure than a long-term solution.(h) In 2014, the General Assembly created the Highway Maintenance Account to fund roads and bridges with revenue from higher gas taxes and vehicle inspection fees, new traf­fic violation fees, rental car surcharges, and other sources. Importantly, the legislature allocated 5% of the account’s funds to RIPTA.13 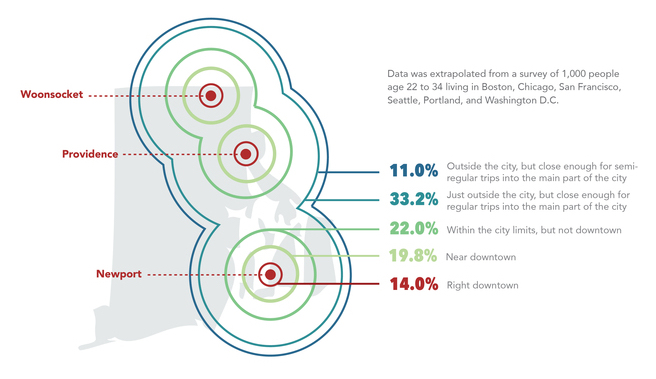 Where Urban Millennials are Likely to Live in RI

While these policies and projects are a start, there is much more that can be done to adapt Rhode Island’s transportation infrastructure to attract millennials. Most importantly, less money could be earmarked specifically for roads and funding could instead support a broader range of types of transportation. In addition to appealing to mil­lennials, a strong push toward integrated public transportation systems and away from personal vehicles would also reduce wear and tear on roads and bridges and improve the economy and the en­vironment. While realigning funding priorities in this way is a long-term project, there are simple solutions that can be implemented more quickly to start shifting the focus of the transportation system. For example, creating bike and bus lanes is an inexpensive option that can be done within the existing infrastructure system.14

As Rhode Island moves to strengthen transpor­tation options other than driving, connectivity is also a key concern. Initiatives that boost intracity connectivity would appeal to young people living in Providence and other urban cores. Price-tiered bus fares, for example, make short trips more af­fordable and thus make public transit more attrac­tive to cost-conscious millennials. Improving con­nectivity between cities is also critical. A proposed commuter rail stop in Pawtucket and Central Falls would link that area to Providence and Boston, providing a car alternative that would strengthen Pawtucket’s attractiveness to young artists and other millennials. Connecting remaining breaks in the 12-mile Blackstone River Bikeway and the “missing mile” in the 19-mile Washington Secondary Rail Trail would safeguard bikers from hectic traffic stops during their commute. It would also pro­vide recreational access to the new Blackstone River Valley National Park(i) and through the cit­ies of Cranston, Warwick, West Warwick, and Cov­entry.

Another type of connectivity to consider is inter­net and cell phone access. Making 3G, 4G, and wireless technology available on public transit and providing apps that allow users to easily access transportation schedules and routes will make public transit more appealing and accessible to tech-savvy millennials.

These types of projects would help make Rhode Island a more connected, accessible place to live, with a robust transportation infrastructure attractive to young professionals. Bike paths, pedestrian bridges, and other transportation “alternatives” do more than contribute to Rhode Island’s charm – they offer commuting and recreational opportunities that can attract a millennial workforce and bolster the state’s economy. A guiding principle for developing millennial-friendly transportation should be to connect neighborhoods and cities to each other and make them accessible in as many ways possible: on foot, by bike, via public transit, and by car, whether public, private, or shared.

While many cities saw an influx of young college graduates over the past decade, with increases of up to 50%, Providence grew its population of col­lege-educated millennials just 6% from 2000 to 2012.15 Kansas City, Missouri, is one city that has succeeded in attracting the educated millennial workforce, despite having no particular advantage over other cities when it comes to job prospects.16 Housing and office construction are booming as millennials move to the city for new cultural opportunities, mixed-use development, and a planned streetcar line. With the right transporta­tion infrastructure, Providence might be able to draw in more millennials as well.

The tail end of the millennial generation is coming into adulthood and entering the workforce in droves. In order to bring their creative and economic energy to the state, Rhode Island should have a well-connected, technologically-enhanced transportation infrastructure that supports millennials’ urban, active, flexible lifestyle. The state can attract millennials by continuing its recent move toward a performance-based approach to transportation planning and allocating more funding to mass transit, pedestrian, biking, and car- and bike-sharing projects. The more choices there are for millennials to get to where they are going, the more likely they are to stay. 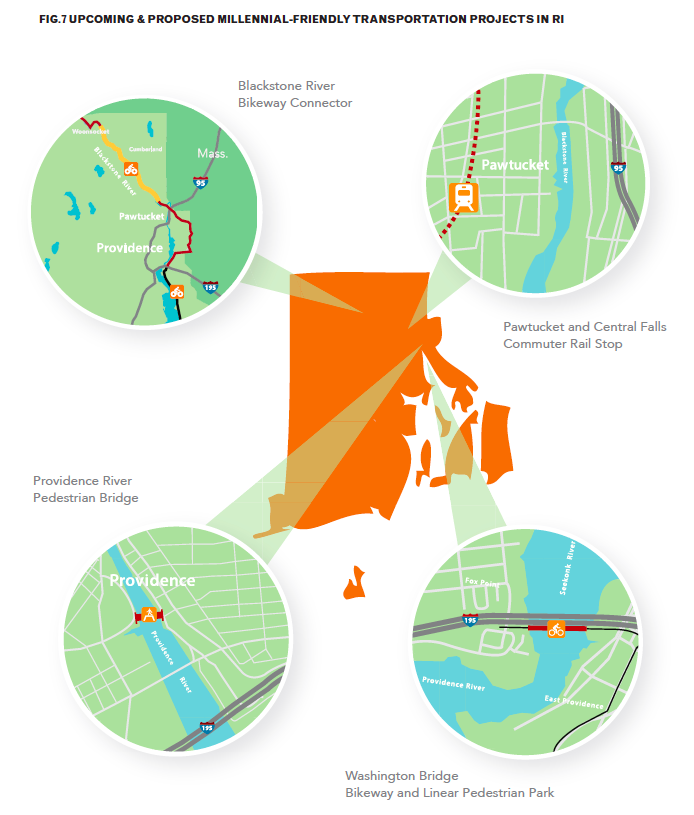 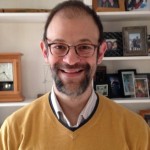